A look into the art of tranquility 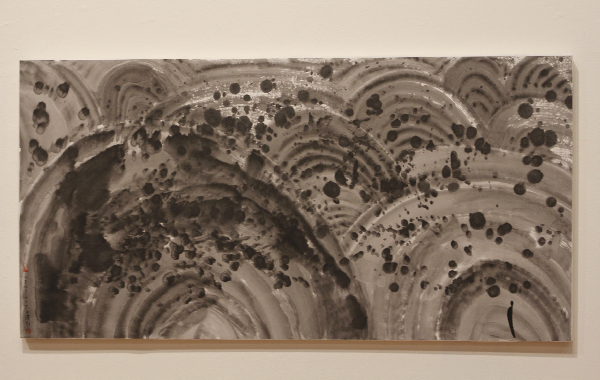 These paintings show the general theme of meditation and solitary tranquility.

The installation of the first exhibit of the fall semester is being completed on campus this week.

Normally a host to student artists and work, the new exhibit opening on Tuesday, Sept. 6, is that the artist Chan Master Chi Chern. Born in Malaysia, Master Chi Chern was ordained as a Buddhist monk in 1985.

Since then, he has graduated from the Chinese Buddhism Research Institute of Fo Guang Shan in Taiwan, and authored more than 60 books on meditation and Buddhism, among numerous other accomplishments. To have his art on display at
Skyline is no small feat.

“I didn’t think this was an achievable thing,” Gallery Coordinator Paul Bridenbaugh said, “I first became acquainted with his art about two years ago.”

That is how this exhibit started. Through a lot of communication, Bridenbaugh was able to organize this exhibit and two receptions lead by Master Chern. Though Master Chern has wanted the opportunity to display his work in the Bay Area, this is the first time it has been possible. And as Bridenbaugh agreed, the cultural exchange opportunity for Skyline students is incredible.

As a renowned teacher of the Chan school of Buddhism, much if not all of Master Chern’s art involves Chan and meditation. This is evident in the works that will be on display, from the paintings of solitary tranquil figures among hills and waterfalls, to the writings alongside them.

This exhibit will provide an interesting look into a culture many students may not be familiar with, both visually and beyond. Though the paintings will be accessible to all, the writings on display will be posted in two parts. They will be posted on the walls with the paintings in the original Chinese, with a translation posted next to them.

The themes will be similar to those of the paintings, best described by Master Chi Chern in his own writings: “With a glimpse of Chan / One departs from suffering and confusion / They who tread the path / Shall realize enlightenment / Seeing through the clouds of hundreds and hundreds of miles / Uncovering immaculate self from / snow of a thousand mountains.”

From Sept. 6 to Oct. 7, the ink and water calligraphy, paintings and writings of Chan Master Chi Chern, as part of his series “Chan, Doing Nothing,” will be on display in the Skyline Art Gallery.

On top of that, on September 7 and 9, Master Chi Chern will be on campus giving a talk and painting or calligraphy demonstration. Both of these receptions will be in the Skyline Art Gallery, with live music performed by cellist Yawen Hsu.

“He is a renowned teacher,” Bridenbaugh said, “This is a wonderful opportunity for Skyline.”