Gambling with video games on the rise 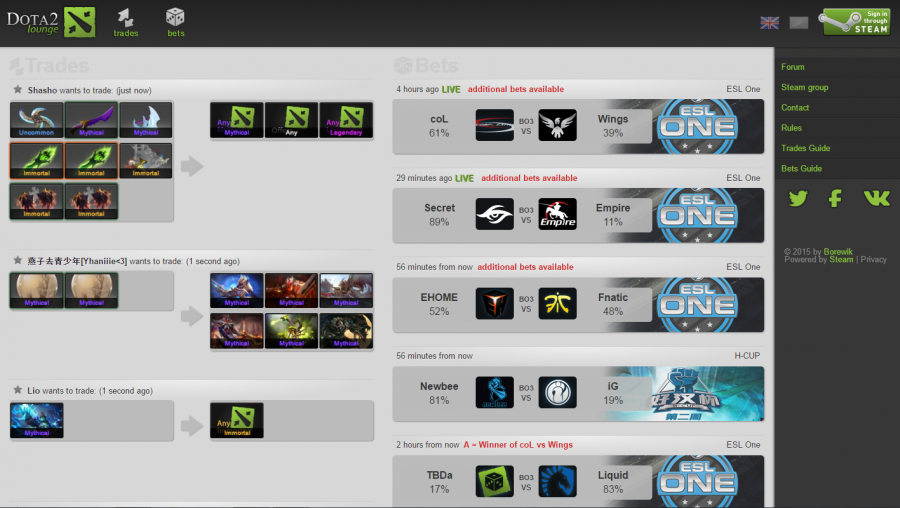 A screenshot of a listing of E-Sports games on Dota2Lounge, where people make bets on different teams.

If there’s one thing that makes for a good story in any context, it’s the idea of beating the odds. With the trend of gambling systems being implemented in video games, beating the odds has never seemed easier.

One of the most important concepts in gambling is the idea of “expected value,” or the amount of reward one gains from a particular game. In this case, the game is poker.

In games such as “Defense of the Ancients 2” (“DOTA 2”) and “Counter-Strike: Global Offensive” (“CS:GO”), gambling is implemented in the form of “Treasures” and “Crates,” respectively.

Each of these “Treasures” or “Crates” contain an in-game cosmetic item of varying rarities, which alters the appearance of either one of the games’ characters or their weapons.

These items can later be sold for real-world currency or traded with other players through Valve’s Steam platform. Some players even trade a rare item in exchange for real money using Steam, an online service for PC gaming, and pay for the cosmetic through Paypal, bypassing Steam altogether.

The rise of e-sports has been a boon to digital gambling, especially in games like “DOTA 2.” Sites like DOTA 2 Lounge allow players to bet their digital items on e-sports matches similar to something like fantasy football pools.

Since these digital items can be sold for real world money to other players, the proposition of gambling for one of these rare cosmetics is very enticing. This is due to their potential real world value, and thus, the “expected value” of these cosmetics could see a large increase.

However, e-sports betting exists in a legal gray area. For example, the Gaming Control Board in the state of Nevada recently disallowed fantasy sports sites to operate in the state without a license, which many of these sites do not have.

Ryan Morrison, an attorney for the Morrison/Lee law firm which specializes in legal issues relating to video games, spoke about the legal standing of fantasy e-sports sites.

“There are a lot of different laws surrounding gambling, and CSGOLounge and the similar sites don’t follow any of them from what I’ve seen,” Morrison said. “The sites are, in my opinion, clearly gambling sites. They don’t age verify properly, and it’s very dangerous.”

Skyline student Ryan Liang believes that responsibility for the prevention of underage gambling lies on both game companies and parents.

“Both parents and game companies have responsibility,” Liang said. “Game companies should have more disclaimers and parents should help with their part.”

While DOTA 2 Lounge was not available for comment, the website’s rules page acknowledges this issue: “By placing a bet on Dota2Lounge you are confirming that you are in abidance with your country’s laws which allow you to participate in item-betting. This is generally 18 years of age or older, but make sure to check.”

In a match-fixing incident, “DOTA 2” player Aleksey “Solo” Berezin was caught betting against his team for 322 euros, and intentionally losing a match. This example highlights the impact of gambling on e-sports, rather than a product of it.

Alan Bester is a professional “DOTA 2” caster who commented further on the matter.

“Relative to the estimated $20-30 million total prize pool from all four ‘DOTA 2’ Majors,” Bester said, “The couple of thousand dollars one could conceivably make by ‘322-ing’ an individual match is attractive mostly to players whose outside financial options are extremely limited.”

Beverly Muse, Master of Marriage and Family Therapy, and counselor at Skyline College spoke on digital gambling’s effects on the body.

“Kids, adults, youth, can spend hours without realizing it and get locked in,” Muse said. “It’s hard on your body to be constantly doing things with your hands, the screen, your posture. Anything can get problematic, it’s all a matter of finding balance with it.”

Like all gambling, in video games it isn’t necessarily troublesome. But it can easily become a problem.