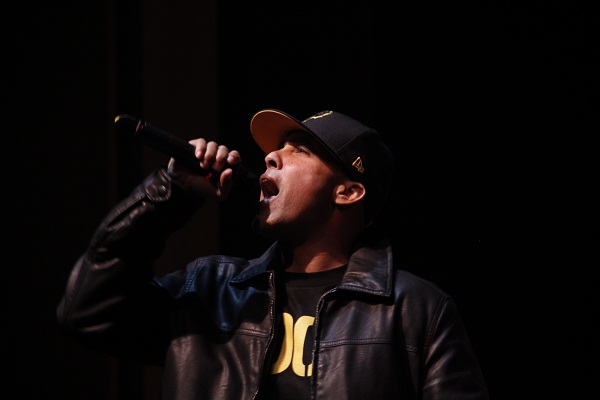 Jasiri X performing at the annual "Rock the School Bells" concert, on March 7, 2015.

On March 7, the 8th annual Rock the School Bells event took over the Skyline campus. Students and members of the community came together to take part in various workshops held throughout the day, in addition to the concert that regularly wraps up the affairs at Rock the School Bells.

This year’s event opened with performances by Zulu Grem and Young Fia, followed by a welcome address from Skyline Dean of Counseling Angelica Garcia and Mathew Ledesma, a member of the Rock the School Bells advisory board, before keynote speaker and hip hop artist Jasiri X took the stage.

After the opening ceremonies, Rock the School Bells kicked off with a bang that wouldn’t stop rolling throughout the day. Attendees learned various odds and ends from each workshop that they attended, teaching them about hip hop, break dancing, rap, street dance and graffiti.

Nate Nevado, a member of the Rock the School Bells advisory board, mentioned in a video interview that a highlight that really blew his mind was when he was approached by a woman who flew from Mexico to attend the event only to fly out the following day.

“She wanted to bring some of the knowledge, the resources, back to the university in Mexico to teach to her administrators, counselors and educators about what she learned today,” Nevado said.

He shared this story because in his view, it illustrates that hip hop isn’t just limited to certain countries and regions.

The conference had plenty of workshops that covered the basics of hip hop culture, but didn’t stop there. The topics included touchy subjects, such as police brutality, profiling, stereotypes and identity.

One theme that ran through each of the workshops was the mission statement of Rock the School Bells to empower and educate the youth about the importance of higher educations, career exploration, increase awareness of the value of personal development and healthy lifestyles, and to promote social change.

The promotion of social change was best demonstrated in the workshop, “A Better Tomorrow Panel: Addressing Police Brutality Through Hip Hop,” which was facilitated by Davey D., a native New Yorker and Oakland resident.

“A word of advice: you may be an outsider to the culture,” Dregs One said, during a post-workshop Q&A session. “It’s probably best to look at those things not with an judgmental view, but with one that seeks to understand why people act that way.”

Entrepreneur, advocate for humanity and second-degree black belt Nina Park also answered questions for students, pointing out that the way to change social issues is for individuals to know themselves and how they interact with family, friends and their community.

“At the end of the day, that is the key to shifting everything,” Park said.

After the workshops, a dance battle took place in the cafeteria in which all dance styles were accepted, while the DJ/beat-making stations were available in the theater lobby for students to take part in.

By 5:30 p.m. the concert was ready to start, and featured performances from Skyline students, high schoolers, and others, with a highlight being the beat boxing battle between high school english teacher Mike “Eachbox” Tinoco, Francisco “Frisco” Romero, and Jasiri X.