About that car in front of the theater 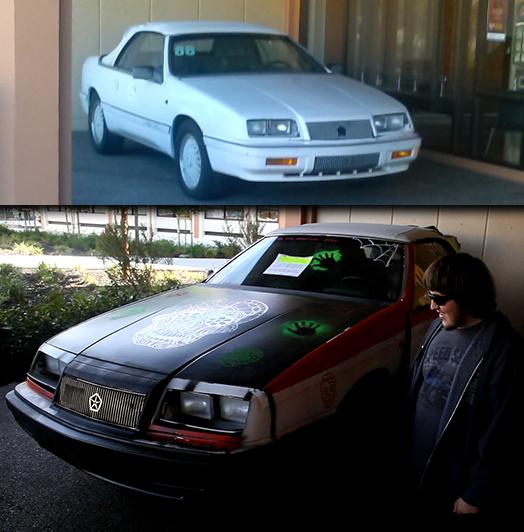 Skyline students may have noticed the ragtop Chrysler jalopy that has been parked in front of the theater since last week. That car is a part of the Dia de los Muertos exhibit that is currently running in the art gallery, and serves as an altar for Day of the Dead tributes to the dead.

The altar is presented by the Career Advancement Academy Automotive Entry Level Tech students (CAA Auto Tech), and was donated by the Auto Tech department.

“We were talking about day of the dead,” said Program Services Coordinator Soledad McCarthy. “Many of our students are from a Latino background so we decided as a class to do a project where we’re building an altar.”

“Day of the Dead is celebrated every year around the last days of October,” Auto Tech student Daniel Castillo said. “People commemorate the lives of their families that died by placing altars, but what we have here is just a representation.”

For that representation to be a fixer-upper car was a natural fit.

How this particular car was chosen for the project, in a way, reflects the Dia de los Muertos spirit. It was a dead car that is being given new life as a celebration.

“Every semester there are cars that just have to be destroyed based on how long they’ve been in use for educational purposes for automotive departments,” McCarthy said. “That one was next up, so they donated it to us and we used that as our altar.”

As for the placement of the car, it wasn’t the first choice, but its current, more visible location allows more members of the Skyline community to observe as the 23 Auto Tech students add their artistic flair to the vehicle.

“Originally it was going to be in the middle of the art gallery, but unfortunately because of the weight of the car it wasn’t able to be in the gallery,” McCarthy said. “So we decided to put it there so we can work on it and once the day of the dead show happens were going to move it out further into the quad.”

The project is ongoing throughout the run of the art show, and each Wednesday at noon the students will be in front of the theater adding new elements to the car. What those elements are remain to be seen by the greater student body, and by the students and faculty involved. The project is designed to be freeform, so decisions as to how to move ahead creatively are made as the project develops.

“Really we wanted it to be a student-centered project and really something that’s meaningful to the students,” McCarthy said. “In terms of art, I shy away from giving too much direction to the students because I wanted the completed project to be something that was impactful and meaningful to them and talks about what day of the dead means to them.”
The Dia de los Muertos art exhibit is showing now through November 7 and the reception featuring live music will be held on November 5 from 12:30-2 p.m.. Students are actively working on pieces in the gallery, giving guests the chance to see art in action. Until the end of the exhibit, the Auto Tech students can be seen working on the car/altar from noon to 1:30 every Wednesday.