The Skyline View • May 15, 2014 • https://www.theskylineview.com/the-focal-point/features/2014/05/15/electric-vehicle-enthusiast-makes-a-pit-stop-at-skyline/ 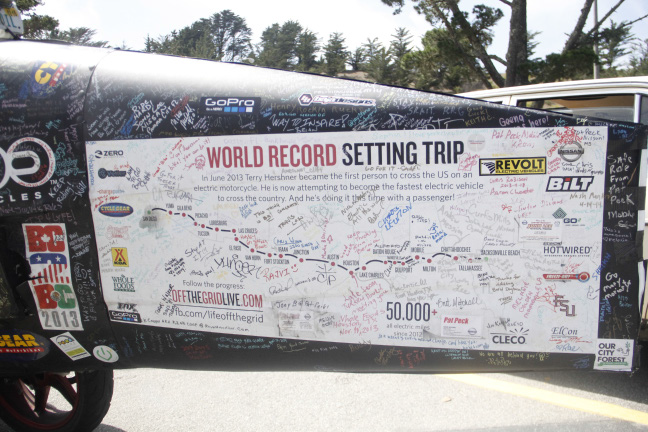 Terry Hershner drove his custom Vetter Zero electric motorcycle to Skyline College in San Bruno, Calif. May 7, 2014 for a charge before heading to San Francisco. In 2013 Herner became first person to travel across country in an electric vehicle.

The charging station at Skyline attracted the attention of Hershner, who says he made history in June of 2013 by becoming the first person to voyage across country on an electric motorcycle. The coast to coast trip, which took five days to be completed, began in San Diego and finished in Jacksonville Beach, Florida.

The new streamlined design will reduce wind resistance and make the electric motorcycle capable of covering more distance between charging cycles. Most people would probably find themselves bewildered upon first sight of the machine, as it has an appearance reminiscent of an alien spacecraft.

To construct the more efficient design, Hershner personally consulted with long time motorcycle manufacturer Craig Vetter to have his electric motorcycle streamlined. Vetter’s renowned amongst bikers for his role in innovating the fairing, an aerodynamic piece that is set directly in front of a motorcycles’ handlebars resembling a windshield. Vetter worked side by side with Hershner crafting a structure that could make long distance travel on an electric motorcycle easier and faster.

Hershner attempted the cross country journey on his electric motorcycle because he was curious about the possibility of breaking new ground.

“I wanted to see if it could be done. It hadn’t been done yet, so I thought it would be something good to try,” Hershner said. “It’s inspiring other people too.”

As Hershner sees it, his journey is proving just what these cutting edge machines are capable of. One of Hershner’s main goals is to prove that electric vehicles are a viable alternative to gas powered cars. According to Hershner, his bike travels as fast, if not faster than most gas powered cars. The lithium battery powered motorcycle peaks at a top speed of 140 MPH.

“Electric vehicles are going to be a force in the future for sure,” Hershner said. “We can’t continue importing petroleum forever.”

In order to get rest on the road Hershner makes short stops only when needs it most.

“When traveling I’ll find campgrounds I’ll plug in to charge at RV campgrounds. I’ll take a little 45 minute nap while I’m charging and then get up and ride all night again but I’ve only got to do that for about four or five days” Hershner said.

Hershner found Skyline College and the charging locations on campus via his iPhone.

“I have a ChargePoint app and it will tell me where charging stations all throughout the state are located,” Hershner said. “Today I was going through Santa Cruz on my way to San Francisco.”

He discovered his motorcycle’s battery required charging so he made a quick stop at Skyline College. The ChargePoint app has many useful capabilities for electric vehicle owners, it can display if a charging station is unavailable because it’s already in use by another vehicle, and when plugged into a charging station the app can show charging status.

As Hershner continues his escapades testing the limits of these machines, perhaps more people will take notice, get off the gas and make the switch to electric vehicles.

“This vehicle charges very quick which is also the future of electric vehicles, when you can charge an electric vehicle faster than you can fill up a 20 gallon gas tank on a car there’s going to be absolutely no reason to use a gasoline car anymore,” Hershner said.