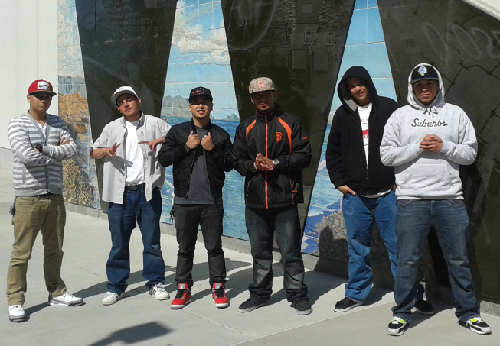 Some of the Urban Youth Society members shed light on the clubs purpose and values during a club meeting March 21, 2014. Photo credit: Matthew Floyd

Tune into 106.1 KMEL or HOT 105.7 and tell me what you hear. Chances are you won’t hear the lyricism or authenticity that KRS-One, The Notorious B.I.G., Tupac, or Cormega gave to the Hip-Hop genre. But a group of students at Skyline are putting in the work to bring hip-hop culture back to its roots.

The Urban Youth Society (UYS) is a group of students who believe that commercialism at the mainstream level is damaging the true message of hip-hop: creativity that can be used as an outlet to alleviate struggle or oppression.

The group originally formed as a campus club in 2011, but isn’t currently a member of Skylines Organization and Club Council. Nonetheless, UYS holds performances on campus and meets weekly to discuss how to promote and preserve hip-hop. Sitting and talking to members of the group, it’s not hard to tell that the group is composed of truly passionate hip-hop purists.

“Hip-hop is a language; anybody who has a story can use hip-hop to tell it,” President of The UYS since Spring of 2012, Sammy Veu says. “When you take Hip-Hop way back to when it all started, it was a collection of people who were oppressed by society who came together and found a non-violent way to let out what they were going through in a positive outlet.”

Various Members of the UYS have expressed their concern for the current state of Hip-Hop, including UYS Co-Vice President Maximilian Verala.

“We’re trying to spread positivity because what we hear in the mainstream nowadays doesn’t really lead anyone to a point where they can take what they’re listening to and utilize it towards their life to help them come up,” Verala says.

Daniel Berk, one of the clubs newest members provides the group with unique insight having been involved in the music industry for two decades.

“If you come into the audiovisual industry and the first thing out of your mouth is hip-hop they turn a blind eye to you,” said Berk. “Yet if you say jazz, blues, or rock ‘n’ roll you’re getting top notch engineers and equipment and it’s not fair; so I came into this club to offer what I’ve learned as a stagehand of 20 years.”

Berk and other members are concerned with the lack of lyrical freedom artists today have within the music industry.

“It’s a shame when you get young artists who have raw talent and the mainstream producers get a hold of them; they screw it up because the artist has no control over what they want to say,” Berk says.

UYS members acknowledge that money is necessary for survival, but they ultimately understand that problems emerge when money becomes an artists main priority.

“Our roots are what got us where we are, but it’s the money that is killing the genre today,” member Keane Nishikido says.

For the UYS club, it’s all about staying true to the art form, even if the mainstream is oversaturated with catchy but vapid club bangers, UYS remains loyal to the roots of hip-hop

“The message we’re pushing is empowerment. When you have something real, that’s true to yourself like your own story and you can spit that in any way,” Veu says. “If it’s real and authentic even people who can’t relate to it can feel the passion behind it”

UYS members agreed unanimously that participating in UYS helped their personal growth and improved their affiliation with Skyline.

“We’re not just a club here at Skyline, were family we really have each other’s backs, and I came to find out I do need a support system, and I know I can turn to these guys because I know they have my back, we’re all trying to push positivity,” Verala says.

The group is open to new members, but in order to join applicants must fulfill the “three and three” requirement. Individuals must attend three full meetings and participate in three events before becoming an official member of UYS. The group has put this guideline in place as a way to encourage discipline and structure among their members.

The UYS meets once a week on Friday’s from 12-3 in The Multicultural Center, and are set to perform on May 2 at the Latino-American’s club meeting on campus.

To listen to the UYS preform click here: listen