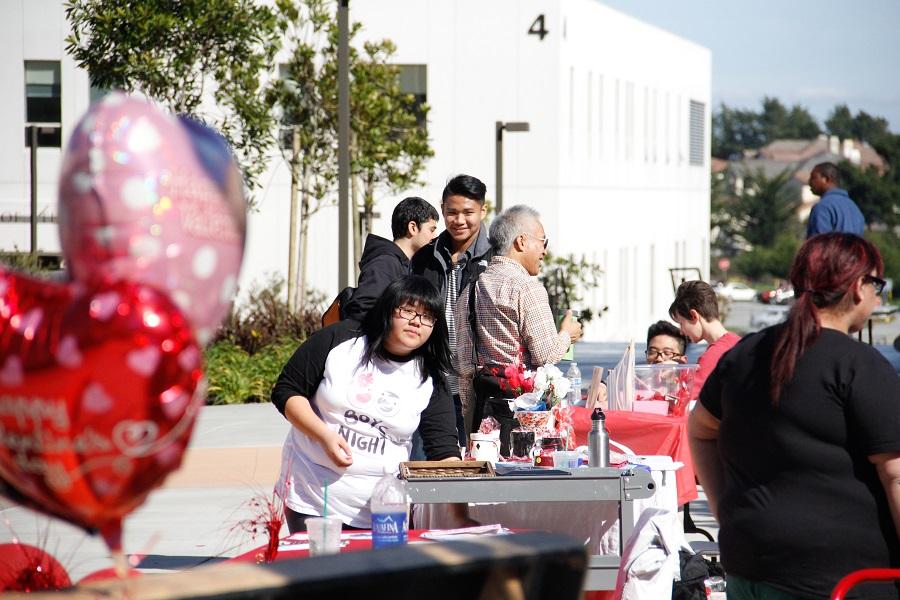 Student and teachers down at the event.

The Associated Students of Skyline College in collaboration with Skyline’s Center for Student Life hosted an event in the quad on Feb. 13, to celebrate V-Day One Billion Rising and National Condom Day in honor of Valentine’s Day, providing heavy information with a light approach.

Both V-Day One Billion Rising and National Condom Day are efforts to raise awareness to issues involving sex and love that could impact college students.

The V-Day One Billion Rising is a worldwide campaign that began last year, to focus on the empowerment of women and their rights to not only be treated equally to men, but cherished. The campaign targets a range of women, from those overcoming abuse to those in countries legally not able to express themselves.

All around the world both women and men have performed (on Valentine’s Day) to a song and choreographed dance specially created for the movement, at public locations including schools like Skyline.

Nichole Palmer, honors dance society vice president, led both female and male dancers in the flash mob that students rehearsed during class and on their free time. Having experience with the dance doing it last year, she took the initiative to get ASSC involved this year.

“This year we had a lot more people, more support, more connections with the student government,” Palmer said.

Because topics such as sex is common at a college level, National Condom day, observed for Feb. 14, was also celebrated by the student government in a way that not only provided valuable information to students, but allowed them to learn in a fun and interactive way.

“The final decisions were the flash mob of one Billion Rising, free goody bags with candy, condoms and pamphlets inside them, popular music, a balloon game and ongoing trivia with bookstore gift cards for the winners,” Dominique Gio of the Programming Board said. “ The pamphlets included information from the Health Center on safe sex, relationships, STIs, and a brochure of events occurring around the bay area on Valentine’s weekend for couples and singles to enjoy made by the students of the Center for Student Life and Leadership Development.”

Some of the clubs on campus had tables at the event to raise money. One raised money by creating a game with balloons that students had fun playing.

Student government also found the event to be successful in helping students.

“Personally, I think the event was successful in grabbing the attention of the student body by having them participate in the games and taking the pamphlets and goody bags so we were able to encourage safe sex and awareness,” Gio said.