An Open Microphone to Your Unheard Words 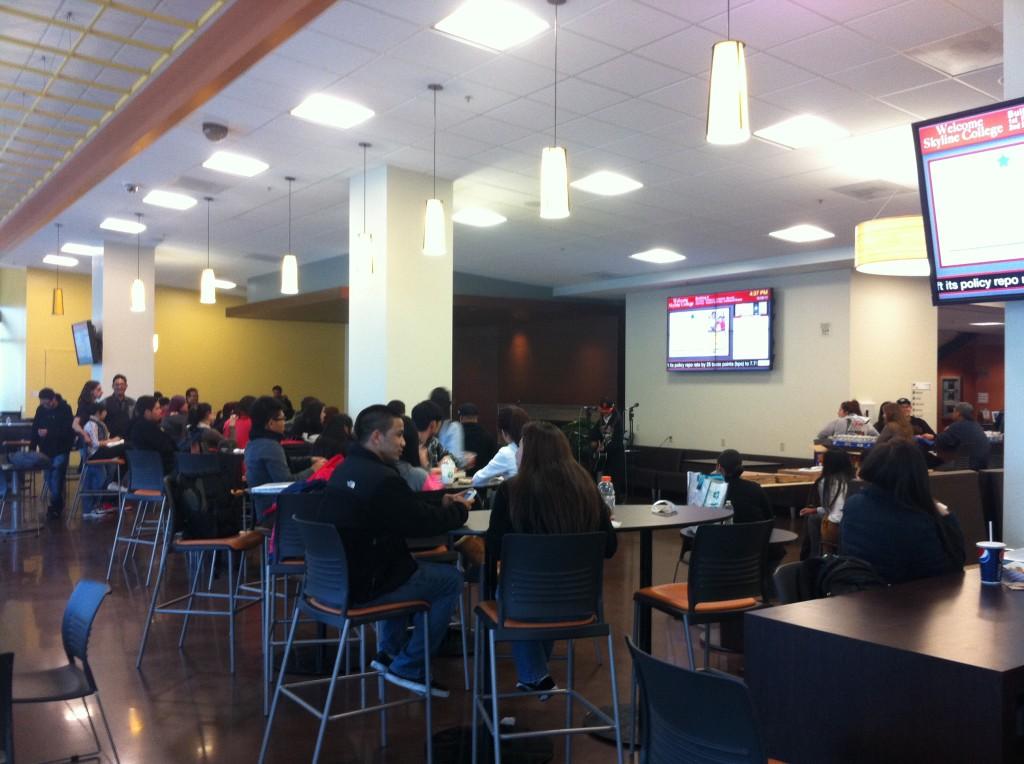 It’s about everyday when you see a student walking around fidgeting with their phones, looking for the most entertaining Instagram post or news feed on Twitter. It’s rare that you won’t see students on their laptops looking at the funniest videos that the world has to offer. It’s more than likely you’ll walk into students with headphones in their ears, replacing the natural sounds of the world with the newest music that is probably in the next person’s playlist.

Rarely do we have time to the see live performances, let alone those performances even taking place. The music, diversity, and energy that live shows bring to the table, is an aura that cannot be replaced by a phone or YouTube video.

Patrick Del Moral, head coordinator of the open-mic, put together a large repertoire of performances for Skyline students to witness during their walk throughs and sit-downs in the cafeteria.

Musicians, dancers, instrument players, and all other genres of entertainment all came together to put on a show for the students. Not to mention that there was complimentary food and drinks.

Students who were either eating or doing classwork got a chance to either watch or hear the performances. A lot of students that were passing though the cafeteria found time to watch at least one performance. From a performer’s point of view, one more audience member is another person to share your talent with.

A majority of the performances consisted of singers and rappers, each with their own uniqueness in regard to their talent. For instance, Ruce Head, who was also a previous head coordinator for Skyline’s open-mics, performed using combinations of rap freestyles along with singing and beat boxing. In addition, he was asked to perform along with other artists that hit the stage.

Another performer, Czarina Garcia, displayed her talents on Skyline’s microphone. Wanting her story to be heard, Czarina rapped about the struggle for survival and some of the goals she set for herself for her future. Cleverly, she incorporated the tune from the Bay Area famous song “Thizzle Dance” with a guitar.

Skyline counselor Nate Nevado also made an appearance on the stage. By collaborating his freestyle skills along with the crowd, he made a memorable performance prior to the intersession. While asking the crowd to take out random belongings, Nevado consistently spoke about each object within his freestyle, and discreetly asked students to check out FYE.

Other performances included a jazz band that collaborated the usage of a saxophone, piano, and drums, and a Wild West dance that got the crowd highly entertained.

Skyline College has plenty of talented students. Take the chance to find opportunities for the next open-mic and make a statement about who you are.