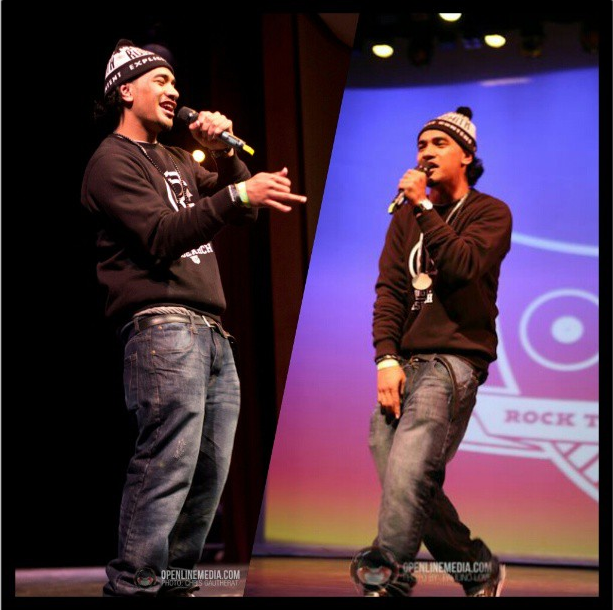 Own Sammy "Uce" Veu (left) and his friend performing at the Skyline College Theater.

Today’s hip hop scene has had a major influence on America’s youth, but struggles to continue the originality of it occur with nearly every song that is released.

There are a few artists that keep to their original story, and try to influence the youth of today. Skyline College has an artist that is well known for his originality, and his name is Sammy “Uce” Veu.

Uce is a current Skyline College student, and also the president of the Urban Youth Society. He keeps himself active with the bridge between youth and hip-hop, and strives to create stories through his art.

Since late 2008 Uce has cooked up a melting pot of Southern rap, original East Coast hip-hop, and a laid-back West Coast style for himself. In addition, his influences include Tupac Shakur, Biggie Smalls, and, especially, Method Man of the Wu Tang Clan.

“It was just a hobby when I first started out,” says Uce, “When i found out I had a deep passion for music and writing, I didn’t start lifting off until my first year of college.”

Opportunity opened up the doors for his music, considering that Skyline is active with open-mics, and our school-wide famous Rock The School Bells event.

Through these events, Uce presents his style of lyrical wordplay. He says “I play with my words around a lot, my flow switches up a lot, I don’t keep the same steady rhythm, I got a different cadence, but it all comes together.”

Keeping one’s audience surprised with a variety of flow, lyrics, and energy is essential to a performance. Telling a story and making sure the audience understands it are the difficulties that hip-hop artists come across.

The originators of hip-hop came from the slums of the streets. Past artists have touched upon topics of selling drugs, killing sprees, and the overall difficulties of life.

He centers his perspective of hip-hop based on an individual’s story. Everyone has their own unique story that cannot be replicated by another. That is the beauty of hip-hop. A rapper doesn’t need to go through the difficulties or hardships that the originators of hip-hop have faced in the past, but can rather speak on the stories that are current with the issues of present day.

“You have to come real when you’re rapping,” Uce says, “My influence is that whatever your story is make sure it’s unique to yourself because no one can duplicate your story.”

Artistic music,from an artistic mind, can easily influence today’s youth. Uce’s music was influenced by Tupac, Biggie Smalls and Method Man; later on our youth could be influenced by artists like Kendrick Lamar, J. Cole, and even Uce. Take a listen to his music, and maybe get inspired by his work and push forward for the love of hip-hop.