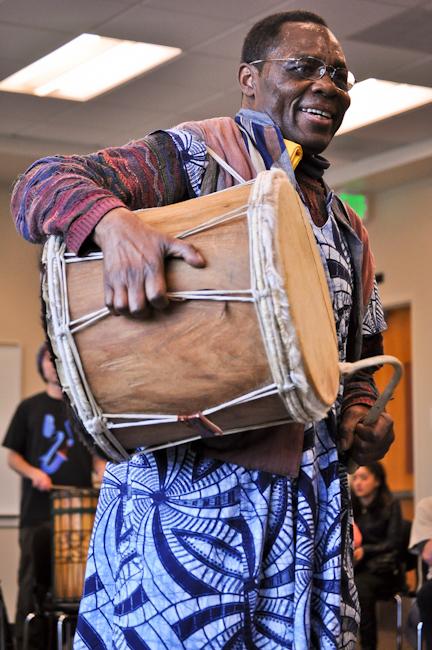 Thump, thump, thump. A constant beat, then bell, then maraca, then chants. Twelve congo drums hold steadily to a rhythm that reverberates across the room above the cafeteria; it is felt through the floor and the air.

It doesn’t sound like a typical day at school, and it isn’t: S. Kwaku Daddy has come again to Skyline with his drumming class from CCSF to perform traditional Ghanian folklore music in celebration of black history month on Feb. 14.

Over 150 people attended the event. While some students came for extra credit, others came purely for the show, such as music major Vincent Iahnone, who said it was right up his alley.

“In my mind, I thought: free drumming concert, who wouldn’t want to attend,” Iahnone said.

Even President Regina Stanback Stroud stopped by for the show and joined in playing the conga drums for a song.

Born in Ghana, Daddy (his African last name) has been teaching the West African tradition at all levels including kindergarden and college level across the United States and used to play with famous jazz musicians such as “Dizzy” Gillespie.

With 48 generations of master drummers behind him, Daddy claims that he did not choose this career of teaching and performing Ghanian music; instead, “the tradition chose (him).”

With the encouragement of Daddy, some students were inspired to clap along and dance. Songs were long, averaging five minutes each, and the longest was over 10 minutes long.

Psychology teacher Tony Jackson said he liked the event and thought it was good for the students, appreciating the lively atmosphere it created.

“It’s a different dynamic for the kids because so many of the students are used to passivity, and this is an activity,” Jackson said. “It’s a way of communication through music; every instrument has it’s own language.”

Most of the instruments were conga drums, but there were also cow bells, axatse (a maraca-like instrument) and a handheld conductor’s drum called a bakahat that Daddy used. He started each song by telling its name and folkloric significance. The prelude to “Positive” in particular created crowd reaction:

“Throw all things away that are not making you a whole being…and then when you throw it away, you go dancing,” Daddy said while smiling to the crowd.