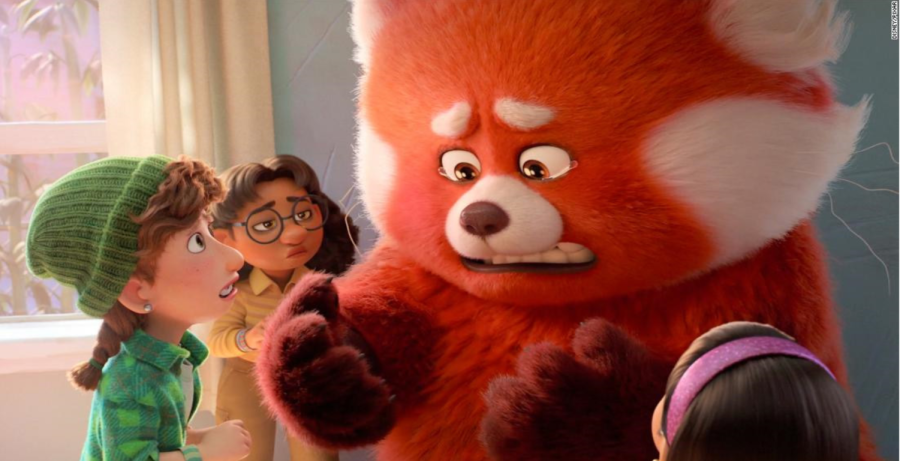 Turning Red is the newest film produced by Pixar, gathering a variety of different reviews.

Pixar’s latest motion picture “Turning Red” emphasizes the adolescent struggle a female experiences when maturing, while simultaneously dealing with the dynamics of an Asian household. As in every Pixar movie, the studio sprinkles that Disney magic — illustrating ordeals as a fun, fantastical adventure that’s very enjoyable to watch.

As puberty is the main focal point of the film, the main character Mei Lee, explores new feelings of a pubescent like developing a crush, and learns to control and accept these emotions. Her power of transforming into a big red panda showcases her inner battle.

Viewing the topic of teenhood through a female protagonist is unexpected yet refreshing for a Disney flick. In most cases, puberty is a subject that isn’t fully discussed and taught, especially for young girls. So, Lee’s transformation is the perfect metaphor to symbolize the changes that teens go through.

As a male, I recognize many pre adolescent females are left flustered to figure out how to process this unfamiliar “beast” inside. Essential items such as tampons or pads are considered vulgar despite being necessities for women. Pixar brings awareness to these issues using Lee’s personal conflicts and featuring pads in the movie. Thus, it is very satisfying and uplifting to follow her coming-of-age journey and eventually embrace what is considered embarrassing to most female youth.

Furthermore, the movie also does a sensational job at portraying the high expectations placed by and problems with Asian parenting. I cannot say how stereotypical the Chinese representation is in the film as I am not of Chinese descent. However, as a Filipino, the style of parenting and concepts shown resonated with me — relating my own experiences growing up.

There were many moments where I saw myself in Lee; trying to get the best grades, constantly pursuing the approval of my parents, or feeling shameful in expressing myself. At times, I am even brought to tears, moved by the dialogue. Because of this deeper connection with the lead, I felt more invested with the story and more appreciative towards Pixar for representing Asians.

Additionally, the early 2000s setting and references made the animation even more entertaining. Pixar perfectly encapsulated that nostalgia from the catchy music played to the clothing characters wore. These elements made me very reminiscent of my own childhood, being born in 2000. I couldn’t help to think how simpler times were without much technology we have today.

Overall, Turning Red is a vibrant, adventurous cinema viewing that will play with your emotions in a positive way. I recommend it to anyone and everyone, regardless of your race or age. Whether you strongly relate or not, there is definitely something to take from this piece and savor.