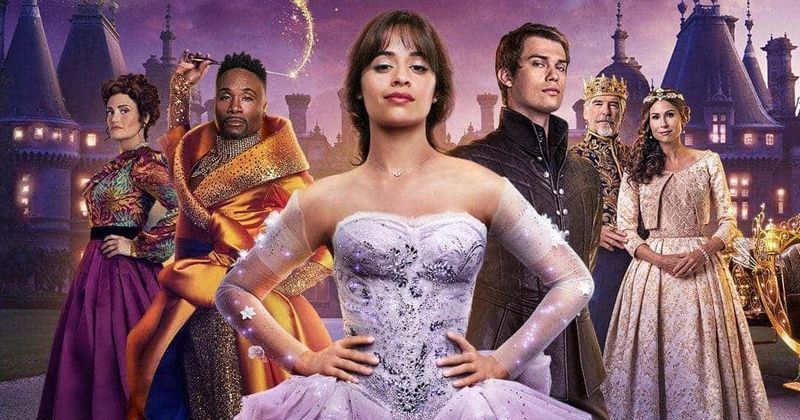 In the new Amazon original movie, the classic tale of Cinderella is reimagined and recreated. The film stars Camila Cabello, Billy Porter and Idina Menzel, and is directed and written by Kay Cannon.

This version is a modern movie musical. We know the old tale of how Cinderella was mistreated by her stepmother; she was a dreamer, had big hopes and dreams, and was lucky enough to have a fairy Godmother that gave her that little push in life that we all need. However, the ambitions and dreams she has in this modern version are completely different from what we are used to seeing in previous classic tales.

This modern Cinderella doesn’t dream of being a wife, marrying prince charming and fixing her life. She is an entrepreneur, creative, crafty, and wants to travel the world to experience “freedom,” not just by leaving her abusive stepmother’s house. Plus, there’s no such a thing as competition between women. There’s no ugly sister or body shaming, which I found very pleasant and relevant to our current society, which constantly features much dialogue on social media.

I also loved how inclusive this film was and the fact that Cinderella wasn’t the traditional concept of “beauty,” using a Latino woman to represent a princess. I admired the way they picked Camila Cabello for this role without an excess of makeup or changing her hair color and embracing her natural beauty.

Cinderella’s queer fairy godmother (Billy Porter) was fabulous and an example of how this film was such a hit with representation, breaking that “mold” of beauty standards and princess fairy tale.

However, with all of these great highlights, the movie let me down. I mean, this was such a great narrative: the ideas and the intentions were amazing but they deliver an underwhelming product with great costume design and it’s a shame.

To start with, I wasn’t expecting this to be so much of a musical. I felt like I was watching High School Musical and was back to my teenage years all over again. If we are doing a remake, shouldn’t they make it a little bit more realistic? Why do we need them singing every two scenes? In addition, none of the songs were catchy or stood out for me, similar to when I watched Frozen and I couldn’t take “Let It Go” out of my head.

They also overdid it with the autotune by trying to pop some classic and familiar music from current artists like Madonna and Queen. Sadly, I think it played against them. I understand this remake wasn’t made by Disney, but not even the familiar sounds delivered a successful experience for me and that’s the problem. In a way, I had Disney-like expectations.

I mentioned that I loved how they picked Camila Cabello for this movie. She is the reason why this movie had great ratings, along with all of the fandom that has been preaching for her on social media. I think that she has a solid image and concept. But as an actress? Well, that’s a different story. When some artists try to explore different artistic ventures, sometimes it shows that they can be great at singing and performing but not at acting. I think that this is the case for Cabello. She is great as a performer, but an inexperienced actress.

The story between all the singing was less strong. Even though they had more experienced supporting actors around her to help her shine, she did not deliver. Furthermore, she had zero chemistry with her co-star. I wanted to believe they were “in love” but it was completely plain and dry. I missed that sparkle.

Amazon delivered a movie with poor song choices that leave an “aftertaste” as if it was put together in seconds. Even though it has great things that work amazing individually, when you put it all together it looks messy and unpaired. We understand this is a modern Cinderella and we love an independent queen, but many things are missing here.

There’s not much room for romance. I guess this movie is more about self-love and worth than your average princess fairy tale.