A frustratingly good poverty simulator of a space janitor 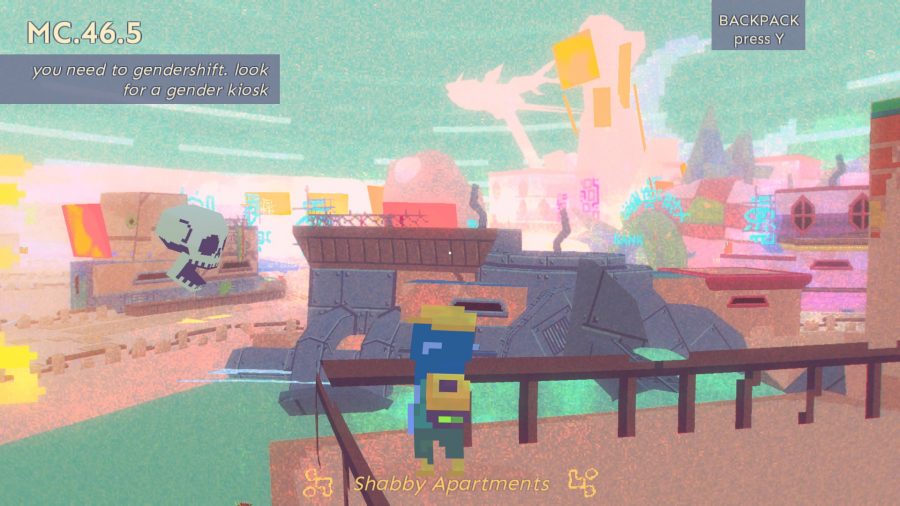 The Diaries of a Spaceport Janitor is definitely not for everyone but it is a great game in its own right. The game explores the janitor’s mundane life and effectively contrasts the “hero” tropes that we have today in modern games.

Graphically, the game uses three-dimensional environments with pixelated, two-dimensional characters and foliage. The world is extremely colorful with a wide variety of neon signs and bright buildings. It’s like an eccentric painter’s palette spilled over the game but in a good way.

The game only has one objective and the entire gameplay revolves around it. As a janitor, you must find a way to get rid of a curse that was placed upon you while trying to live from day-to-day. You have to eat, incinerate trash to earn credits, trade items and sleep to make ends meet.

It is brutally hard at times since money is hard to come by in this world. There are obstacles that can prevent the player from earning said money, such as military men that eat your currency when you get close to them and several other reasons.

The problem with these obstacles is that they seem contrived and only exist to make the player miserable. There isn’t any real reason for these obstacles to exist and the game doesn’t offer an explanation as to why these obstacles are set in place. On top of that, there are not many directions on how to finish the game, which can cause the player to lose motivation from finishing it.

What’s worse is that the players are at the game’s mercy. Most of the things that you find in the game can be sold but only to a specific vendor who changes their trade list every day. This adds another hurdle for the player to earn money and live through each day. The player can actually influence the items that spawn on the ground by increasing their luck but it only makes a marginal difference.

However, despite all of the frustrations found in this game, it delivers the experience that the developers had in mind for the player. “The Diaries of a Spaceport Janitor” isn’t trying to be a traditional game where you are the hero and slay your way through your problems. This is a game about a janitor who aspires to be a hero and the road to this goal is paved with blood, sweat and tears.

It is a brutal example of a reverse-power fantasy. Everything the players do barely makes a difference and when they do, something is around the corner to kick you in the shin and take everything from you.

If you are a fan of games like Richard Hofmeier’s “Cart Life” or “Papers Please,” then you will love “Diaries of a Spaceport Janitor.” This game will give you the piece of empathy your melancholic soul needs with a happier aesthetic.