Battlefield: bringing the “Great War” to your door 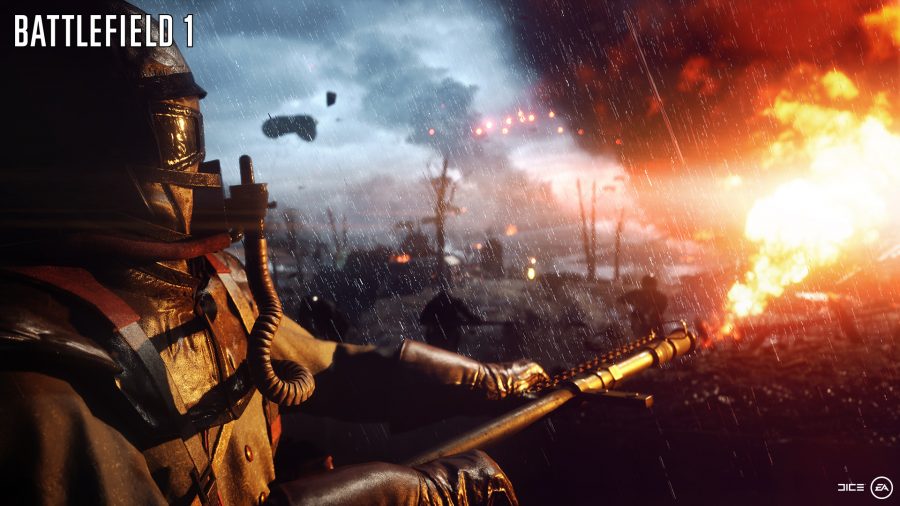 Immerse yourself in the trenches of World War I, where your gas mask is now your best friend. Photo credit: Courtesy of EA Games

In a video game industry that has seem to become entrenched in sci-fi and futuristic first-person shooters in recent years, many gamers have called for the more realistic feeling, boots-on-the-ground style of games from the past.

Fortunately, Swedish gaming developer DICE has met that call rather excellently with “Battlefield 1,” a gritty and brutish game that finds itself where no recent shooter has gone before: the blood-filled trenches of World War One.

Unlike other games across the industry, the campaign of “Battlefield 1″ is exactly that: a campaign. The game gives you a tour of duty through the different battlefields of The War to End All Wars, which the game quickly reminds players in its opening sequence, “ended nothing.”

Each level throughout the campaign is presented in a very episodic, nearly movie-like manner, taking you all the way from the ice-covered Italian Alps to the deserts of northern Africa to fight alongside Lawrence of Arabia himself. While short, the campaign will satisfy like a bad movie: cheap thrills, but enough action and excitement to keep gamers entertained.

But you and I both know that we didn’t jump into the virtual time machine and go back a century to play single player, and that’s good, because multiplayer does not disappoint. The classic “Battlefield” formula is back, and more intense than ever. For every laser gun, spaceship and jet pack that can be found in recent iterations of its rivals, “Battlefield 1” throws out a rusty bayonet, single-engine biplane, and a gas mask with one dirty, bloody middle finger raised at the competition.

Due to the lack of modern technology in the era, many were skeptical of what potential gameplay might be like. DICE perfectly adapted the game’s time period to the classic “Battlefield” formula, though.

The game is more up-close and personal than previous titles, due to the limitations of the small arms of the era, and charging across the desert as a horse-drawn Calvary trooper was one of the most raucously slapstick and fun moments I found myself in.

Despite the new setting, veterans of the “Battlefield” franchise will have no trouble strapping on a gas mask and jumping right into the action.

Classes have been slightly tweaked, with the “medic” replacing “engineers” and the introduction of “Elite Classes,” which are power-ups that can be found throughout the battlefield during online play.

Destructibility is back and finer than it has been since “Battlefield: Bad Company 2,” as buildings will quickly crumble into rubble or be shattered into splinters by the zeppelins, battleships and even an armored train that will be called in automatically for the losing team if a match is too one-sided.

All in all, while not perfect, “Battlefield 1” is a refreshing, enthralling and intense experience that will grab players by the shirt and bring them along for a ride that can be described as nothing short of spectacular.