A must watch if you can ‘bear’ the necessities 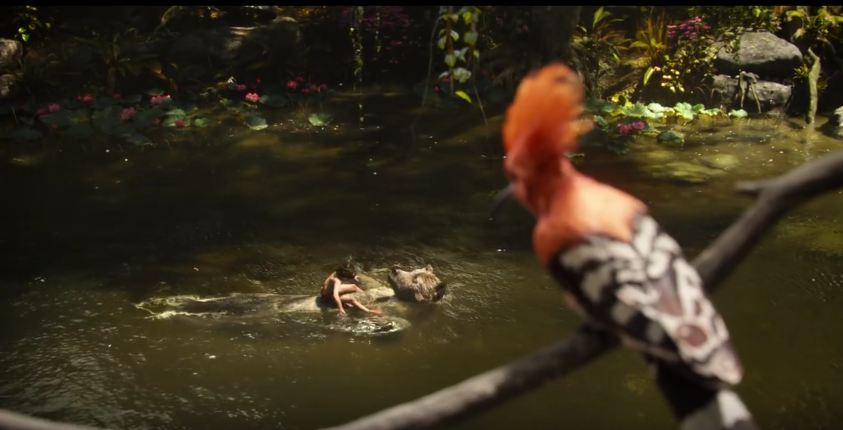 A screenshot of Mowgli and Baloo floating along the river singing "Bear Necessities".

For a movie where the only actor is a child and the rest of the cast is CGI (Computer Generated Imagery), “The Jungle Book” is surprisingly good.

One that exhibits the acting prowess of a young actor, and shows how Disney has once again successfully turned a classic cartoon into a successful live action movie that both children and adults will enjoy.

“The Jungle Book” has the same plot as the original 1967 animated feature of the same name, where we follow the adventure of Mowgli, played by Neel Sethi, a boy raised by animals in the jungle.

The closest thing to family he has are the pack of wolves lead by Akela and Raksha, voiced by Giancarlo Esposito and Lupita Nyong’o respectively, and Bagheera, a black panther voiced by Ben Kingsley.

Sethi does a fantastic job mirroring key scenes from the original movie. His acting is very seamless and convincing, and never does he make it seem like he is the only one that isn’t CGI.

Without a doubt, Sethi definitely proves why he was chosen for the role. He can portray such a wide range of emotions, especially happy ones.

Like when he and Baloo, voiced by Bill Murray, were singing on the river and Sethi has a genuine look of joy on his face, as if he actually was singing with a bear. A carefree look, where he forgot about his worries, for but a moment.

The rest of the cast? They, too, did a fantastic job in recreating key roles, that made the movie just as successful as the original.

The voice of Shere Khan done by Idris Elba echos with pain and revenge. It can run shivers down a young audience’s spine like it did mine when I watched the original.

Of course the voices won’t seem as great if the CGI of the characters were poorly done. But they were exceptionally done.

From the detail of the animal’s fur, to the kindle of the “red flower,” Disney paid close attention to every detail to keep the audience, both young and old, immersed in the whole movie.

Although there wasn’t as much singing in this rendition of the movie, it did capture the playfulness and joyfulness of the original.

Not only does it mirror the original version, it also has a unique flavor, that audiences of all ages will enjoy, especially those who have seen the original 1967 film. It’s a remake that is just as as good as the original.