The evolution of online multiplayer shooters 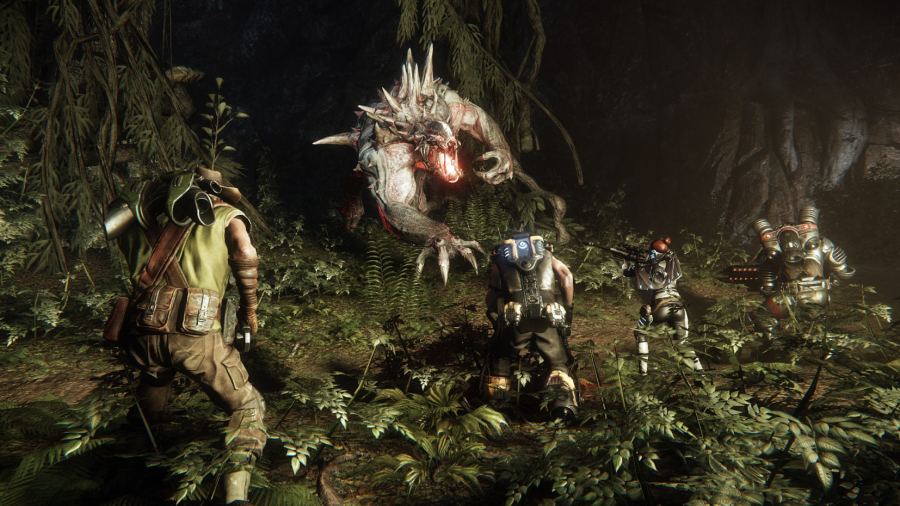 Four hunters take on one of the first monsters you can play as in Evolve, the Goliath. Photo credit: Miguel Garcia

Cooperative shooters have never been as fun as “Evolve” and even playing as a monster, taking on four hunters is really fun. Each hunter has an important role and without one, the whole team falls apart. The monster doesn’t have a fighting chance until they reach stage three of their evolution. Teamwork truly comes into factor when playing as the hunters as each role has their own unique abilities and without one, another hunter will suffer, then another and then it’s over.

The game is only in its alpha phase, but it already is so much fun, that is, if you get to connect to a game. The servers aren’t as great as they should be, it can take up to an hour to find a game, and sometimes you can’t even find a game. For a game where it’s highly recommended to play as a team of four, it’s really difficult to ever find a game as a full party of four. It’s understandable why they don’t allow a full party of five, as it only encourages exploiting the progression system of the game since the fifth player is forced to be the monster. Some people really just want to play the game for fun, though, they could have just allowed a private match where there is no character progression after the match. The servers are pretty stable at times but occasionally, players could get booted out of a game, or the console will just force quit the game on them, which is very frustrating.

All connectivity and party system issues aside, the game is actually really fun. The most effective strategy for hunters is to hunt down and kill the monster before it has any chance to evolve, while the monster has to outsmart the hunters and make it to stage three evolution; and under the right hands, the stage three evolution is virtually unstoppable. That’s where the game gets its title, “Evolve,” that is the main goal of the monster, while the hunters have to adapt to the monster’s play style, so the hunters are evolving in their own way too.

There are four hunter classes: medic, trapper, support, and assault. From the alpha, there are two characters per class, totaling to eight playable hunters. Each hunter has different abilities, including the additional four unlockable hunters. This allows for a nearly-endless amount of possibilities when putting together a team of hunters. There were two playable monsters in the alpha, the Goliath and the Kraken, each equipped with their own devastating abilities.

“Evolve’s” Big Alpha is already over but there is a chance that they’ll launch the alpha again, so make sure to sign up on their website. Of course, they will also most likely have a beta test, but that probably won’t be for a while. “Evolve” is set to release on February 10, 2015 and it will be available for PC, PlayStation 4, and Xbox One.