“Titanfall” review: A Titan of a game

“Titanfall” is a brand new title from Respawn Entertainment, the crew (or what’s left of it) from the award-winning studio, Infinity Ward. “Call of Duty,” their previous work, has a lot of influence in the game.

In “Titanfall,” you are a pilot capable of driving the most powerful exoskeleton known to man, the Titan. You can play as one of two factions, each with its own campaign, the Interstellar Mining Corporation or the Frontier Militia.

The game looks great on Xbox One, even though the game can only run at a 792p resolution; Still, it’s really beautiful. All the colors are vibrant, and you can see enemy pilots from more than a mile away. The amount of detail put into the environment is mind-blowing, this is the first true “next-generation” title.

The Titans look amazing, every gear, nut, and bolt on a Titan is surprisingly visible. The game runs very smoothly too, it’s able to run at 60 frames per second. Even if the game is at the same level as the past “Call of Duty” and “Battlefield” games, all the action on-screen takes you away from the impression that this game is actually running on old technology. 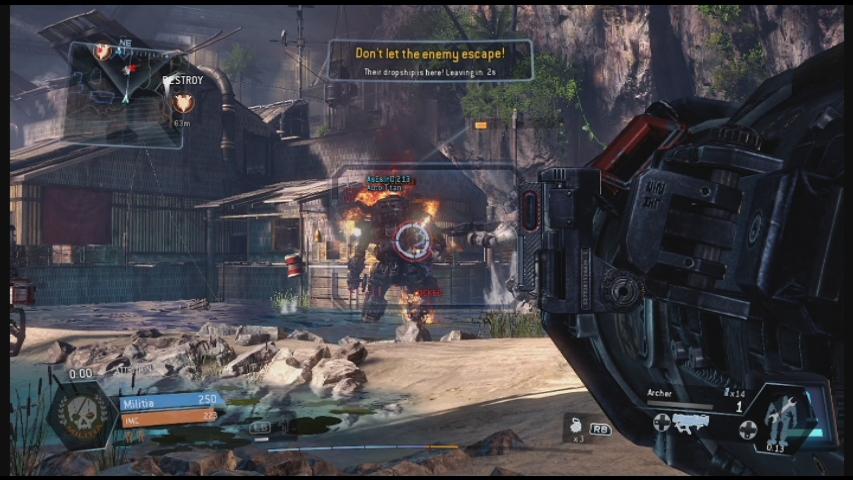 You’re not hopeless as a pilot, you can still take down a Titan with weapons like this Missile Launcher.

“Titanfall” is an online-only game, and the Xbox One servers are not as fast as the PC servers, even if they are dedicated servers. It was a lot more common to have “lag spikes” on the Xbox One version of the game. There were some moments when I was shooting someone and hitting them enough to take them down, but they were still able to run up to me and “jumpkick” me dead. Basically, what’s happening on the server isn’t always what you see onscreen.

The gameplay is great, the possibilities on the battlefield are endless. Since the pilots are equipped with jetpacks, they are able to maneuver very heedlessly. The rapid pace of the game means that you always have to be on the move, or else you’ll be shot down by an enemy pilot, or an even stepped on by an enemy Titan.

Thankfully, pilots are very agile, they are able to run on walls and jump from building to building. The game can get very hectic this way; It really puts your shooter skills to the test. In a way, it brings back the classic feeling of old-school shooters, constantly moving and getting out of harm’s way.

This time around, Respawn Entertainment knew not to focus on a story. Though there is a story, it’s almost non-existent, just like my previous experiences with the “Call of Duty” and Battlefield games. It’s your cliché “rich people are trying to control the economy, and the poor rise against their power” story.

You play as the rebel Militia first time through the campaign, and then you play as the power-hungry Intergalactic Mining Corporation the second time through. It’s a really dry story, and each match is still played online. The way the game worked was pretty good, but I stayed undefeated throughout my campaign playthroughs, so I’m not really sure what happens when you lose a match. I was generally uninterested in the story, but I loved playing the game. All I really had to play the campaign for was to unlock the rest of the Titans.

The sound quality is surprisingly good too. You can hear almost everything happening on the battlefield, from the ricochets of gunshots and explosions to the grunts making “call-outs” pointing out what is going on around you. The sound is very crisp, even with all the chaos going on; the tiniest details like the grunts’ voices and your own footsteps are still audible.

After playing for more than 10 hours, I can safely say that this is in my top picks for one of the best games of the year. Titanfall is the first game from Respawn Entertainment under a new publisher, and they made a Titan of a game. After being on the battlefield under so much chaos, I’m definitely going to say that “Life is better with a Titan.”