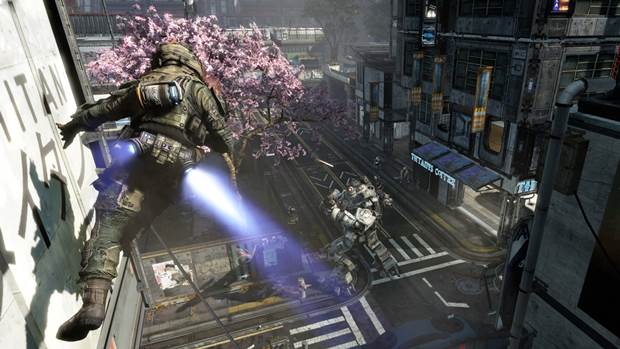 Up, down, left, right, a pilot is able to move on anything, even that titan down below.

“Titanfall” is a brand new franchise developed by the team, or what’s left of it, that brought us “Call of Duty 4: Modern Warfare,” Respawn Entertainment, and published by one of the most hated companies to ever exist, Electronic Arts. With that in mind, expect a lot of comparisons between “Titanfall” and “Call of Duty,” not only from me, but the rest of the gaming universe.

“Titanfall” is brought to us from the makers of CoD4, the former members of Infinity Ward; we can expect another award-winning game from them. “Titanfall” runs on the Source engine, found on “Portal” and “Left 4 Dead.” In “Titanfall,” you are in a new generation of warfare with jetpacks and exoskeletons, called the “Titans.”

Your main role is as a pilot of a Titan, which is highly mobile both horizontally and vertically; from running on the ground through buildings, to running up walls and climbing onto a Titan. The whole map is yours to explore.

I actually didn’t experience much lag while playing the beta. Some players were playing on a 120ms, or even higher latency, but didn’t jump across the map like crazy, or perform actions my eyes didn’t even see. The servers seem responsive, but what I didn’t find was the choice to choose a server that you wanted to join. They just put you in the lobby that you have the best ping with. But this function was present in the “Call of Duty” games, so I’m not surprised.

I really enjoyed the beta, and I can’t wait for the full game to come out, with even more maps, even though the maps were already satisfying because they were large and also because of the vertical play space allotted throughout each map . I always felt like I was playing a new map every time I played a match.

All-in-all, the game is really fun. Respawn Entertainment was aiming for a fun game and they nailed it. It doesn’t have any annoying entrails from CoD. They only took the good parts from the series, and added even better features, creating a titan of a game.