Flappy Bird: Flapping your way to frustration, urge, and victory 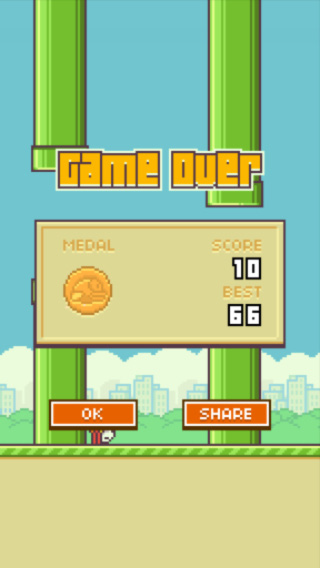 A new sensation that only requires a simple tap from your fingers, found its way to the peak position of downloaded apps in the past couple of weeks.

Flappy Bird has become the game that has taken over people’s lives. This addicting, never-ending, Super Mario look alike game creates chaos for players. Personal competitions, swanky photos posted on Instagram and Twitter, and the urge to beat your previous score are all side-effects of playing this game.

Other games are usually rated anywhere from easy, to medium, hard, or very hard. However, this game has been given a “Satan difficulty level.”

The game is as simple as getting past the green tunnels and getting the highest score possible by surpassing each one. The difficulty of this game comes through the slightest touch, in which you lose and restart your hardworking performance all over again. That last score you had of 36 quickly drops to a score of three for your next turn.
“It is definitely difficult once you start,” Skyline Student Rachel Suen said. “Once you get the hang of it it’s okay, but you still get frustrated when you hit something.”

The source of this game’s addictive nature is the fact that it has absolutely no end whatsoever. Usually, games that have an ending, making them futile after being completed. No other missions or goals need to be completed; therefore, the adrenaline rush to get to the end disintegrates.

There’s a rhythm to the game. Once players find the rhythm that gets them going past each obstacle, the game seems a lot easier than it actually is. Trying to figure out angles, the number of bounces you’ll need, and anticipating the next pillar all come down to patience.

Additionally, the setting of the game reminds pkayers of the Nintendo favorite, Super Mario. The tubes, obviously being the source of frustration for the game, may confuse new players due to the fact that in Super Mario games a player is able to step on them, and possibly enter them leading to a different part of the map. The similar sounds between the two games bring more of an aural attraction for new players.

Speaking for myself, this is the one game in which I get antsy and feel a supreme rush of adrenaline running through my veins as I am gently tapping on my iPhone. The moment I realize that the angle of the bird is directly correlating with the green tube, I lose my mind.At that point, I tell myself “one more time.” Normally, this “one more time” method quickly turns into the umpteenth time, and next thing you know, an hour has passed.

To all who dare to play this game, beware of impatience, frustration, and the urge to beat yourself up for hitting the green tubes.

Have an app you want to be featured? Send us an email [email protected]