Contrast: A depressing game of nostalgia 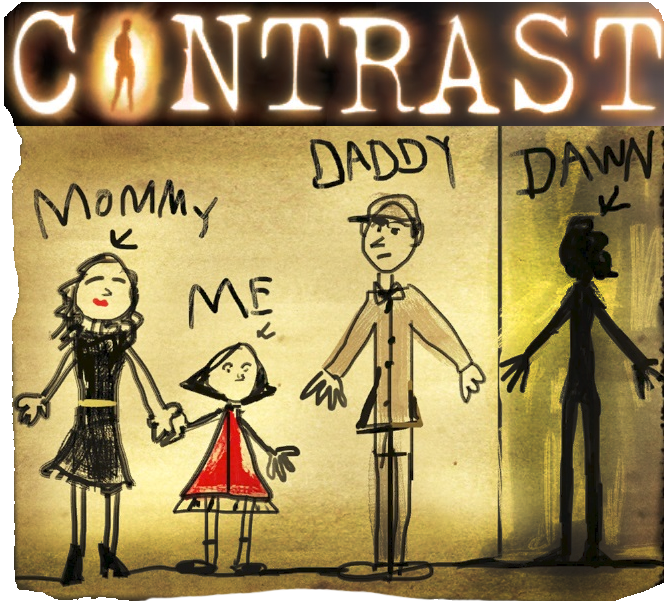 Have you ever played a puzzle game that just tugs on your heartstrings with nostalgia? Well the Compulsion Games puzzle platformer, Contrast, does just that.

You play as Dawn, an imaginary friend of a young girl named Didi. Didi’s sole desire is to live with her mother Kat, a cabaret dancer, and her “father” Johnny, whose get-rich-quick schemes get him in debt with the wrong sort of people, as a family unit. Throughout the game you follow Didi solving puzzles to clear her path in her quest to reunite her family.

The game puts you right into a 1920’s feel with its noir-style artwork carried along with soothing jazz music that you just cannot help but listen to. It took me a good 5 minutes to start them game.

The game skips along like any other puzzle platformer, you come across an obstacle, overcoming it in a puzzle-solving manner. The only thing that separates Contrast from the pack  are its varied elements of problem solving; whether it be shifting light switches to their corresponding switches or breaking down barriers,  that’s stuff you’ve all seen before, but the real kicker here is Dawn’s transition from 2-D to 3-D. A big portion of this game will have you switching dimensions to solve puzzles, utilizing shadows on the wall as floors and shifting out of them. This was something that really took me in Contrast, it took an imaginative step forward in the puzzle platforming genre and made it quite interesting visually.

While I am on the subject of visuals, the characters aside from Dawn and Didi are all seen as shadows on the wall. I enjoyed seeing characters interact with one another in a 2-D-shadow- perspective, but what would have made it more appealing is if the game would not make you wait until a good hour into the game before knowing how these characters look like (Didi’s mother is quite the babe by the way).

The major factor that really took me away from this game is its glitch gameplay. Often times I would find myself falling through floors and dying, or finding myself stuck in a wall, forcing me to restart and lose a portion of my progress. These glitches do not happen often throughout this five hour game but is frustrating nonetheless.

A small piece that hurt this game was its depressing atmosphere. The soothing jazz music is a pleasant touch to the game, but combined with the noir style art and a sad storyline did not mix all too well for me. Now don’t get me wrong I enjoyed this game but it just made me feel helpless throughout the game solving puzzles for a little girl who wants to live with mommy and daddy.

All in all I would recommend this game to any puzzle-game enthusiasts. This indie game is only five hours long but is only $14.99 on steam as well on the XBOX Arcade, but if you are fortunate enough to already own a PS4 you can get it for free on the PlayStation Network.