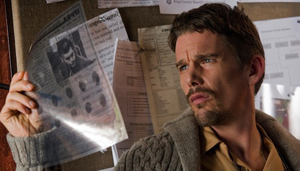 Over the last few years, the main themes we have been dealing with in horror movies are ghosts and demons. It’s not very original, but when done properly it can be thought provoking and effective.
Never before have I been more disappointed. If you’ve seen the trailer for Sinister, then you’ve basically seen the entire movie. This supposed supernatural horror film produced by Scott Derrickson starts out with the Oswalt family of four moving into a house where another family was murdered. Shocking, right? You see the former family murdered in the very beginning of the film. Ellison, played by the lovely Ethan Hawke (from Gattaca), plays a crime writer who’s writing a book based on the murders of the family.

Ellison is putting boxes in the attic and he notices a mysterious box that says ‘home movies’. I don’t even like watching my own home movies, let alone OTHER people’s home movies, unless someone is streaking or getting hurt. I also don’t get how ALL of the movies are super 8 with a projector and all. Let’s be real, this murder took place in 2011, you’d think whoever had put them there would have upgraded to a digital camera for better quality, or at least a camcorder. Good ole’ Ellison feels the need to watch these films, which you should notice that there is only a single ‘home movie’ from 2011. Everything else is from the stone-age, when super 8 was acceptable. Ellison hooks this all up in his office and watches them. The first one titled ‘Family Hanging Out’ shows a family just frolicking in the grass and having a party when all of a sudden, they’re being hung. He continues to watch another movie and another, until he just scares himself to the point where he starts hearing strange noises within the house.

Yes, I know it’s obviously going to be unrealistic, but you just expect more. Ellison sees and hears things that start happening and he sees the image of Bagul, a demon who is captured in the images; if you see him it opens his realm. Bagul is an interesting character because he strongly resembles the dummy of ‘Saw.’ He captures one child from each family and seems to eat their soul. Each family is targeted for no apparently no reason.

I’m not saying it was all bad. It had potential and some good elements such as the occult themes and the scary imagery, but put that against the mostly dry and flat story line paired with the near mediocre acting and it just wasn’t worth it. Maybe I was just bitter from seeing yet another trailer for yet another paranormal activity movie in the opening trailers, but I found myself to just be bored throughout most of the film. This film is only seen as so ‘scary’ because it relies completely on “jump scares.”

The movie was completely on the rails. I just sat there the whole way through the film thinking “Well, this is about to happen” and it did.