Skyline weighs on the reliability of RateMyProfessors 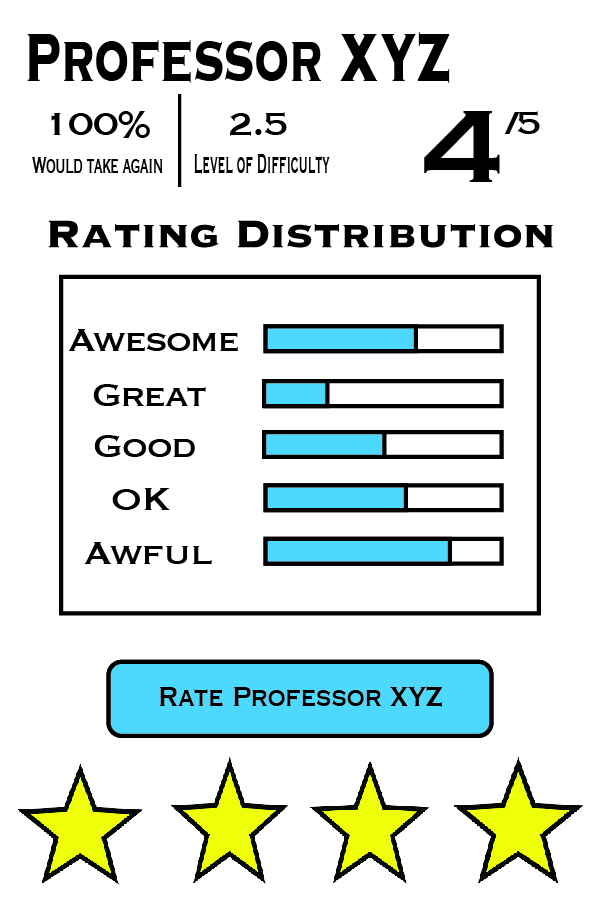 Many students view RateMyProfessors as an important tool in selecting classes for many students.

When the registration period starts, middle college student Riley Choy said that he always looks up professors to choose for enrollment. Aside from asking his peers about the class and the instructor, he also checks their ratings at RateMyProfessors.

“I always go in with an open mind about the professor,” Choy said. “I don’t think the ratings are necessarily an accurate reflection of them, but they are something that I can base something off.”

Nevertheless, Choy’s perspective believes that the website could potentially be misleading, no matter how positive or negative a rating could be.

“People could have a different account of how they view their professor based on how good of a student they were, or maybe the student remembers an account of when the teacher was having a bad day,” Choy said.

Over the years, RateMyProfessors.com has been an online destination for students to see public reviews of educational institutions and to learn the educators’ teaching style. With the website allowing users to leave anonymous reviews, having no sort of identification is potentially harmful, especially for professors who are left to deal with reviews that pile and curb their reputation.
In the eyes of the faculty
Psychology professor Dr. Tony Jackson has been teaching for 27 years at Skyline College. Over the years, he comes to acknowledge how he gets unfavorable ratings from users on the website. For him, his 2.2 RateMyProfessors overall quality score has never curbed his enthusiasm for teaching and supporting students.

“Any number of things can go wrong in a course, so it’s a website I think that people should sort of temper their reliance on because it’s very difficult for it to be anywhere near accurate,” said Jackson “… I think some of the negative reviews are much more interesting to read than the positive reviews, and students can have a very different experience in the same class.”

Based on the reviews, Jackson is described to be a tough grader and provides a lot of readings in lectures. For him, this is something he takes on seriously, especially in teaching psychology.

He also stressed that college is different from high school.

“In college, a student should probably read more than they have read in their lives,” Jackson said.
RateMyProfessors, a platform for biases
Jackson believes that the website is biased and does not accurately reflect teachers’ quality of instruction. Language Arts Division Dean Chris Gibson agreed and explained how the website is superficial. Until the feature was taken down in 2018, RateMyProfessors had a “chili pepper pepper” that measures the “hotness” of a professor.

“To me, when [attractiveness] is a factor in whether or not you’re recommending a professor, that’s not a legitimate reason to take someone’s class,” Gibson said. “It should be, ‘Are they good at teaching?’ ‘Do they know the content?’ ‘Do they support their students,’ but whether or not they’re attractive, based on anonymous users, is a very flawed way of evaluating someone.”

“First of all, it’s superficial, and it’s objectifying. So, it’s probably a problem in many ways,” Gibson followed.

Gibson worked part of the language arts division as an English faculty for 16 years, before he was promoted as the permanent division dean in July 2019. His experience as an English instructor has made him aware of RateMyProfessors and guided him on what he could change in his classroom teaching.

According to Gibson, the district is bound to follow a faculty union contract that covers faculty evaluation procedures, timelines, forms, and surveys that were agreed upon. RateMyProfessors is not included in the said contract.
What it takes to be a good reviewer
“I don’t use it at all in evaluating faculty because I have to make sure that I’m following the contract,” Gibson said. “And so, if I’m starting to use something that’s outside of the contract, and that might influence my perception, it’s not fair to the faculty.”

Public perception through RateMyProfessors could also be dependent on a person’s biases. For Jackson, he believes that users have been unfair in giving ratings to Black professors at the college.

“…Years ago, I looked up professors at Skyline who were African American, and the interesting thing was that all of us had a mean a large share of negative RateMyProfessors reviews, whether it was warranted or not,” Jackson said, who is also involved with the African-American Success Through Excellence and Persistence (ASTEP) Learning Community at the college. “… There’s room for racial bias to come into play.”

Computer science student Gene Orias isn’t aware of the website, and he claims he’s never used the website in choosing classes. He utilizes word of mouth and the recommendation of his peers, and he prioritizes the flexibility and schedule of the class.

“I’m pretty sure [reviewers are] pretty biased to the experience they had with the professor…” Orias said.

Students tend to feel jaded in registering classes with a professor who has negative reviews from the website. But for Jackson, he is optimistic that by the time the students get to know him, and he gets to know them, the students would find that the reviews are inaccurate. This happened to allied health student Stephanie Munoz Martin, who learned about RateMyProfessors through her sister.

“It makes me more anxious before I start the class, because I go in thinking, or having all these negative comments in mind about the professor,” Martin confessed.

Martin shared a time when she enrolled in a class where a professor had great reviews, but she ended up struggling in the class contrary to the feedback reviewers left on the website. Not disclosing the instructor or discipline, she did admit that it was mainly because of the topic and rather than the teaching style.

Both faculty and students have something to say to people who tend to leave reviews on the website.

“For me, it’s not that different from just my normal way of looking at the world,” Gibson said. “Be honest and be ethical. Tell the truth.”