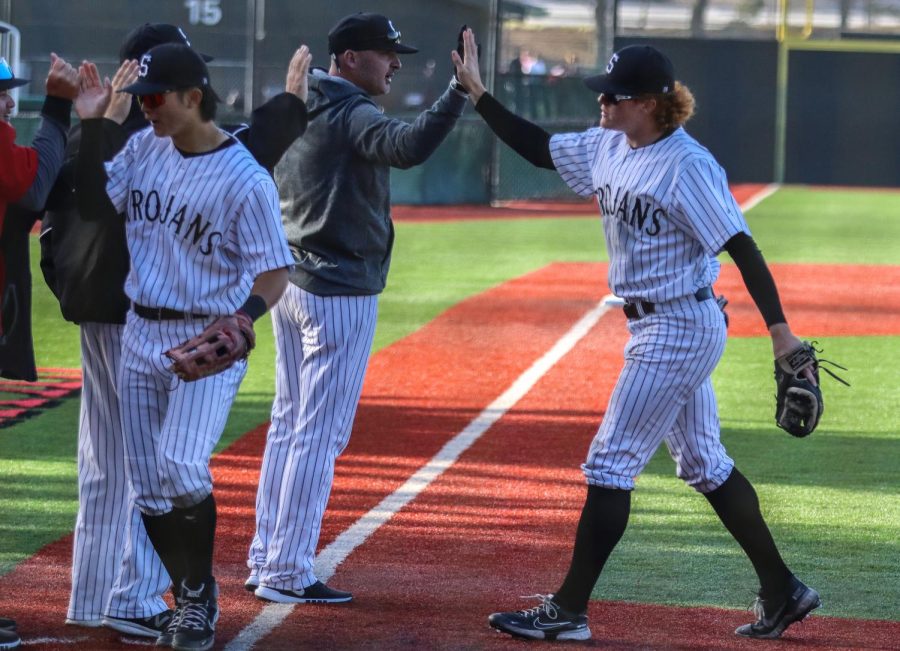 The Skyline Trojans baseball team has claimed the 2022 Coast Conference North Division Championship after a 10-1 victory over Chabot College on Thursday afternoon. It’s the program’s first title since 2004.

To cap off the regular season, the club finished 30-8 overall and 16-4 in conference play

This accomplishment couldn’t have been done without the help of a newly designed coaching staff, a combined team batting average of .311 and a team earned run average of 2.54.

Head Coach Tony Brunicardi reflected on how the season has gone for the team.

“We’ve had a really good season so far,” Brunicardi said days before the clinch. “We are 28-8, ranked sixth in the North and tied for first in our conference, so it’s been a really good year. We have played really well as a team, we have had individual success and team success ”

Gamedays for the team are Tuesdays and Thursdays, with team practices on Mondays, Wednesdays and Fridays.

There will always be ups and downs during games, but the team and coaching staff shows their competitive spirit when it comes to playing baseball. The team’s focus is structured on motivation and the continuation of a long season.

“These guys are really competitive and a motivated group,” Brunicardi said.“ They are motivated within themselves, which makes our coaching staff really easy. This is why we have had so much success. These guys play for each other.”

Jesse Pierce, the club’s star outfielder, explained why he would give their intangibles high praise.

“We have good guys here and good chemistry together,” Pierce said. “ Everyone has been playing with each other for a long time. It’s a great group of guys and a great coaching staff. Everyone does their part in the team and it all works out.”

Pierce is led the club in numerous offensive categories. He’s hitting .383 with nine homers, 43 runs batted in, and 17 stolen bases. He was briefly with the University of Arkansas before finding his way out to California. Growing up in Las Vegas, Pierce was one of the highest-ranked players in Nevada out of high school.

The team raves about their strong all-around chemistry. Players on the team have been playing with and against each other for a very long time.

First baseman and right-handed pitcher Michael Sarhatt rated how much fun he has playing with the team on a scale of one to ten.

“An 11, usually it’s a 10 but with this group of guys it’s definitely more fun,” Sarhatt said. “I grew up playing against these guys. I played a lot of them in high school and now I get to play with them.”

Sarhatt is hitting .342 with five home runs and 28 RBIs. He’s flourished on the mound, tossing 14 innings while recording a 2.57 ERA. He’s also rocking six saves on his resume.

During the week the coaches get the players mentally and physically prepared for the upcoming games. For the players, the week starts with practice.

“We start with a team meeting, we go over the day and talk about the goal for the week or the day,” Brunicardi said. “We start with stretches and get the guys ready to play. This is our physical and mental preparation. We do different drills and then we finish with a team activity.”

Coach Brunicardi has been coaching at Skyline for 15 seasons but this season is his first season as the head coach.

“This group has been great to coach,” Brunicardi said. “This is my 15th season of coaching and this has been my most fun time coaching this group. The guys like to have fun but they get focused when they need to. They are a lot of fun to coach because every day they come out and they want to get better.”

“As a coach that’s all you can ask for,” Brunicardi added.