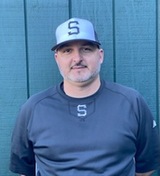 Tony Brunicardi was always in possession of a ball. Ever since he could remember, the thrill of baseball could do wonders for him. At the age of five, he was already in the early stages of falling in love with the game, challenging himself to hit the ball back and forth by himself.

At 36, the thrill hasn’t worn off for Brunicardi. In fact, the love of the game has only amplified. After nearly a decade as the assistant coach of Skyline College’s baseball team and a few promotions for others in the athletic department, he’ll have a unique opportunity to now lead the program as head coach.

The position opened when legendary coach Dino Nomicos ––– the winningest manager in the history of the Trojans ––– announced he would hang up his spikes and take a promotion as athletic director. For the first time in over two decades, Nomicos wouldn’t be leading the charge. Instead, he phoned a friend and dialed a familiar friend.

On the other line, Brunicardi answered.

“He said, ‘Hey, this is what’s gonna happen and you’ll be the interim head coach,’” Brunicardi recalled. “I was just extremely grateful and appreciative with him. He’s been a mentor of mine and I played for the man and then coached with him. So he’s been a friend, a mentor, everything you could ask for.”

Brunicardi rose to notoriety as a three-sport athlete at Burlingame High School, excelling with All-County honors in baseball, basketball and football. After he graduated in 2003, he took the community college route and played for Nomicos at Skyline for two seasons before transferring to pitch at Sacramento State.

Two weeks before his senior year, he suffered a broken wrist in two different areas, an injury that prematurely ended his career and still a talking point that he’s quick to brush off. Disgruntled, Brunicardi picked up the phone and made a call to his mentor.

“I called him when everything happened and that I was going to be done playing and he said, ‘well, you know, why don’t you stay on there and coach,’” Brunicardi said. “And I did.”

Brunicardi leaped into a role as the bullpen coach for Sacramento State and two years later found himself with a full-time pitching coach gig at Yuba College. In 2012, with some experience under his belt, Brunicardi was finally settling into his second career as a coach when Nomicos called him.

Naturally, like he had done so many times before, Brunicardi picked up without hesitation.
“The opportunity for me to come back to my roots and be the pitching coach at Skyline opened up and I couldn’t say no,” Brunicardi said. “It was where I played, this is my home, this is where my roots are. I want to be able to come back and serve the same community that served me.”

Over time, Brunicardi outgrew the pitching coach label and grew to become a reliable number two for Nomicos. He helped with the hitters and worked with the defense, all while developing quality arms on the mound. In addition, he was instrumental as the recruiting coordinator and worked endlessly to track down local ballplayers from high schools in the Bay Area.

Now, more prepared than ever, Brunicardi’s challenge as a first-year head coach shouldn’t have much of an overall impact on the quality of the program.

“He’s been a big fixture in the program,” Nomicos said. “He’s full-time at the college so that’s great that he can move right into that role. For me leaving at this point doesn’t really disrupt the program since we’re opening up in January. So with him already being there and the rest of the coaches, it becomes a very smooth transition for the athletes.”

With Brunicardi at the helm, he views the upcoming season as being important as ever with high expectations due to the team’s blend of veterans and youth. In fact, he thinks it’s the most talented group of players he’s coached during his tenure at Skyline.

“There’s a lot of talent out here and I’m really excited about what this team can be,” Brunicardi said. “Especially if we can grow and come together as a group, and kind of grow with that experience ––– with that youth ––– and still try to get our experienced guys playing as well.”

Coming from a different generation than Nomicos, Brunicardi understands that the adjustment in leadership could take some time for the players to adapt to. However, he expects very little in the program to change completely. What’s there to change when the foundation has been successful for over 20 years, Brunicardi notes.

The same thrill he adopted as a youngster, the same knowledge that was fed to him constantly, the mentorship he was gifted throughout will continue to be passed down to Skyline baseball players.

“I love watching these young athletes reach goals that they didn’t even know they had in them,” Brunicardi said. “That’s one of the most fun things for me, to watch as these young men grow up in the two years that we have them.”