Skyline women’s basketball is hungry for another strong season 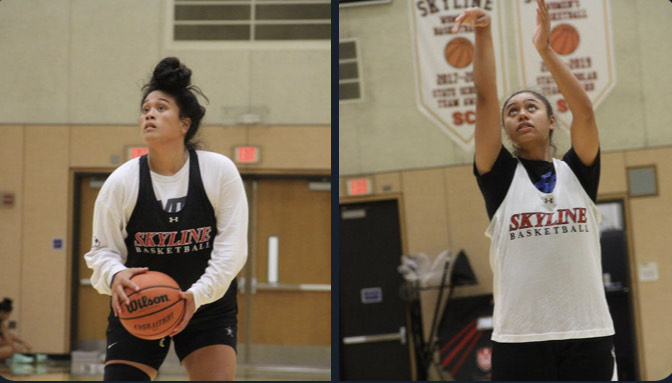 Skyline College women’s basketball team is set to return to the court for the first time since the COVID-19 pandemic canceled the season last year. Their first game back is a 5 p.m. game against Santa Rosa on Oct. 15.

Christopher Watters, head coach of the women’s basketball team, is set to enter his 8th season. Before that, Watters was the assistant head coach of Skyline for five years. Since being a head coach, he has taken the team to four out of five California State playoff appearances in the last five seasons.

After seeing many players transfer to four-year universities to continue their careers, Watters is excited to help the program academically and athletically as his club kicks off the new season. He’s also looking forward to seeing the sophomores act in leadership roles by teaching the freshman players.

“Our sophomores, Nicole Brunicardi and Jalene Parangan have been great so far,” Watters said. “They have a good understanding of the game and they’re doing their best to help the freshmen understand concepts.”

In terms of which game to mark on the calendar this season, Skyline College has always anticipated the matchup against their district rivals, College of San Mateo. As they embark on a season that lasts about 30 games, the contests against CSM Bulldogs are set toward the end of the season on Jan. 26 and Feb. 18. The Trojans tend to view those games as fun and intense, Watters says.

In addition, Watters is hoping to keep on moving forward to create more opportunities for each one of his players throughout the campaign.

“As a coach, I always want the players to achieve their individual goals,” Watters said. “I feel that we have done that consistently over the last seven or eight seasons. I want us to be able to repeat that every year.”

Watters is always pumped up at the end of the two years because it shows how much work he has put into the season for the women. At the community college level, the coaching staff is always putting a focus on advancing student-athletes to four-year colleges and universities to help them continue their playing careers.

Yazmeen Goo, a former UAA player that won the Bill McKay Athlete of the Year award in 2020, is going to be the assistant head coach this season. She has been impressed with the players wanting to get back on the court and grind out their dedication as they look forward to game days.
The team has been anxious to finally play their first couple of games this season ever since the pandemic started last spring.

“I will say, the girls are that much more excited to finally get back on the court again,” Goo said. “Our ladies are counting down the days till they get to play against another team instead of each other every day.”

Goo is going to take in Coach Watters’ patience and dedication to the heart so she can learn the ropes of becoming an assistant coach. Since she is a former player that makes it helpful because it allows her to figure out what challenges can be expected of the team.

“We are a young team, so I believe one challenge we may face is getting used to the speed of the game,” Goo said. “There is a difference in pace and tempo between high school and college basketball so our players who have not played in a college game before are going to have to adjust. This is a challenge that many players will face so I believe our players will be just fine.”

The Trojans girl’s basketball team will play two scrimmages on the road in Santa Rosa and San Joaquin on Oct. 15 and Oct. 28 before they begin the regular season on Nov. 5.