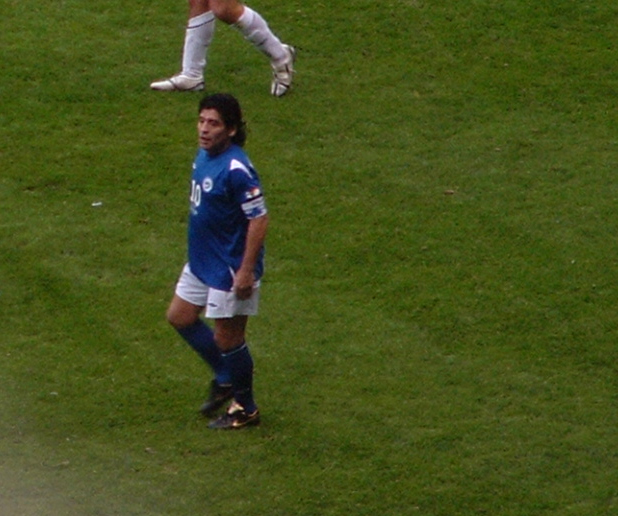 Diego Maradona playing for the Rest of the World at Old Trafford. (Creative Commons)

Today, this year’s trend of a lot of popular figures dying hit the soccer world. Diego Maradona, soccer legend for the country of Argentina, died today, after he was hospitalized and underwent brain surgery.

Maradona started his career at FC Barcelona in the 1982-83 season, making 20 appearances for the club in league play, scoring 11 goals, and playing just under 2,000 minutes, not to mention in the club winners cup the year before, scoring five goals in four games. He also played in the World Cup that year for Argentina, scoring his only two goals of the tournament in a 4-1 win over Hungary.

He continued to play for Barcelona that next year, with another 11-goal performance in 16 games, playing over 1,300 minutes, as well as playing in another UEFA Cup Winners’ Cup before the season, scoring three goals.

His final season of playing came in 1992-93, going back to La Liga, this time playing with Sevilla, he made 26 appearances, scoring five goals. He also played in his final world cup that next year in 1994, appearing in two games, and being on the bench for the next two. Maradona had a goal and an assist in those two games.

Maradona then started coaching, coaching two Argentinian teams: Textil Mandiyu, for 89 days, and Racing Club, for 79 days. He coached from 2008-09 until 2010-11, coaching 24 matches with a record of 18 wins, six losses. His next jobs came with Dorados de Sinaloa in Mexico, managing 38 matches with a record of 20 wins, nine losses, nine ties. His final job was with Argentine club Gimnasia, where he coached until his death. He had a record from 21 games of eight wins, eight loses, and five draws.

Maradona is survived by his son, Diego Maradona Jr., who plays for Villa Literno in Italy, and he will be truly missed by all.