The Skyline View • May 5, 2019 • https://www.theskylineview.com/sports/2019/05/05/skyline-bandminton-pick-up-first-home-win-second-win-overall-against-ccsf/ 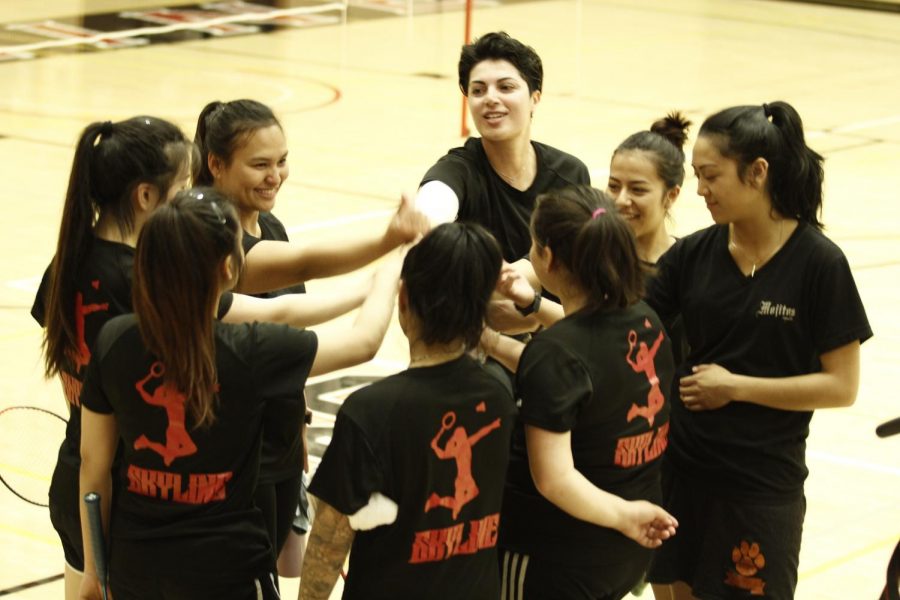 The Skyline College women’s badminton team won the first home game of the season with 13-8 against City College of San Francisco on Tuesday, April 23.

This is the second time of the season Skyline faced CCSF, with the first time going to City College where Skyline got the victory, winning 15-6 on March 15.

In the first-round singles game, Skyline won five out of six matches with a four-point lead on the scoreboard of 5-1. Among these five winning matches, the victories by freshman Nazanin Nematollahi and sophomore Angelica Completo were two of the most critical games because those two matches were closely against their opponents in the deciding game.

Facing City College freshman Jodi Ye, Nematollahi lost the first game 19-21. In the second game, Nematollahi started playing a variation of shots on long clears combined with drops and pulled away to win 21-9. However, in the deciding game, Nematollahi led 18-13, but suddenly made consecutive mistakes allowing Ye to surpass the score and having two match points with 18-20. Nematollahi didn’t falter as she not only tied the score to deuce but also won the game in the end with 22-20.

“Jodi was a very good player. She was very fast with good techniques. I lost the first game because I underestimate her at first. I think I was too proud,” Nematollahi said. “After 18-20 in the deciding game, I understand she has weakness on backhand clear shots, I took advantage of that weakness and send many high clears and get good results.”

Meanwhile, Completo defeated City College player Hallie Meneses with 21-19, 9-21, 22-20. Regarding the third match, Completo pointed out her winning strategies close to the end of the deciding game after the match.

“Just focus and thinking what good shots to make,” Completo said. “Taking a deep breath before serving is really important because it makes my body relax and if I feel more relaxed, it gives me focus.”

Additionally, this win was important for Completo because she lost against Meneses at City College in their previous meeting. However, Completo gave herself expectations with a winning mindset before the match started.

“This game is really important for me because before coming to school today, it’s already in my mind that I have to do well in this game because last time, I kind of give it to her,” Completo said. “I have to give my 110% on this game and I really want that win.”

Besides the players’ efforts in the high-tension competition, the coach’s guidance was instrumental to the team’s success. Kat Reyes, Skyline’s assistant coach indicated how they’re coaching players in the game.

“In between matches, aside from the mental encouragement, we try to give them some strategic pointers of what their opponent might be doing to us or what of our own mistakes we can correct,” Reyes said.

After the first round singles match, both teams began playing doubles for three matches. Out of those three games, Skyline won one of the three matches by freshman players Paola Candolada and Katie Tan with a straight-set victory (21-4, 21-7) over City College doubles pair Jodi Ye and Jennifer Purevsuren.

Although Skyline only won one game in doubles, the team’s head coach, Jan Fosberg, still thinks the doubles team played well in the game.

As this is the first winning home match of the season, the assistant coach feels excited.

“We’ve been at away games the past of couple weeks so it’s nice to come home and get a win,” Reyes said.