Skyline moves to 5-1 at home 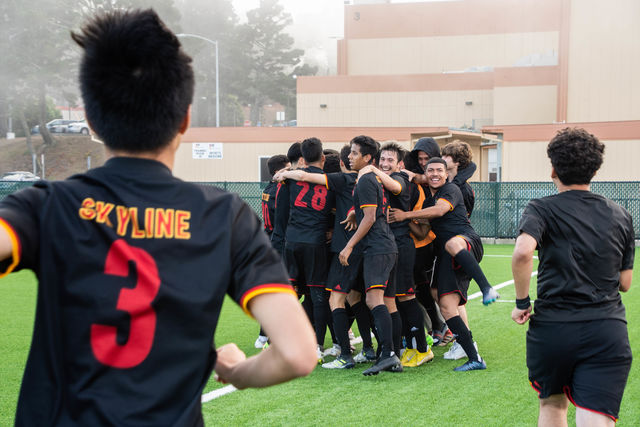 The Skyline team celebrates their third goal of the game before continuing with the game on Oct. 16, 2018.

The Skyline men’s soccer team beat the Santa Rosa Junior College Bear Cubs, on Oct. 16, with a strong second half performance that secured the Trojans’ victory.

The Trojans started Tuesday evening’s game slow; they were heavily pressured by Santa Rosa’s offense in the first 45 minutes. The Bear Cubs kept the ball moving and maintained possession of the ball in the opening minutes of the game.

Both teams were playing high-velocity offense that made for a very entertaining matchup with plenty of high-speed transition plays. The heavy winds at Tuesday evening’s game was having an impact on both goalies’ ability to kick the ball deep.

“It’s a hard place to play with the wind and sometimes the sun so we’re used to it and it’s an advantage for us,” said Skyline’s Head Coach Gabe Saucedo after his team’s fifth home win of the season.

Skyline forward Brayan Mendoza received the sole yellow card given to Skyline. However, shortly after, Mendoza delivered the Trojans’ first goal of the game in the 25th minute. It was a smooth shot on a goal that was setup by midfielder Johnny Hernandez.

Santa Rosa responded to the Skyline’s goal with a good offensive drive that resulted in their only shot attempt in the first half, despite having possession for most of that time.

Christian Marquez scored Skyline’s second goal of the game 20 minutes into the second half which put the Trojans up two goals against the Bear Cubs. Santa Rosa was looking to turn things around in the second half, but they were absolutely deflated after Marquez’ unassisted goal.

The crisp passing from Skyline’s offense put constant pressure on Santa Rosa’s defense in the beginning of the second half and the Trojans kept the momentum they built in the first 45 minutes.

“We just had the opportunities, we opened up and played the correct balls,” Christian Marquez said about his team’s offense. “We had some chances we missed but one thing our coach always tells us is ‘Focus on the next one don’t let that get in your head’ and that is what we did.”

Skyline was looking dominant at this point in the game, but the Trojans got a little comfortable after building a two goal lead.

Santa Rosa got their first goal on the board in the 75th minute of the game off the foot of sophomore midfielder Kevin Rojas. This woke up the Trojans and provided the Bear Cubs a real chance at a comeback.

Skyline defender Herminio Umanzor assisted on Mendoza’s second goal of the game, putting Skyline up three goals to one with three minutes left in the game, and shattered any hopes of a come back for the Santa Rosa Bear Cubs.

Both teams scored goals in extra time, leaving a final score of 4-2 with Skyline moving to five wins and only one loss on their home field.

“It’s mostly mentality, the mentality that is helping us is that we can’t lose in our home,” Skyline’s left defender Jose Lopez said when addressing his team’s success on their home field.