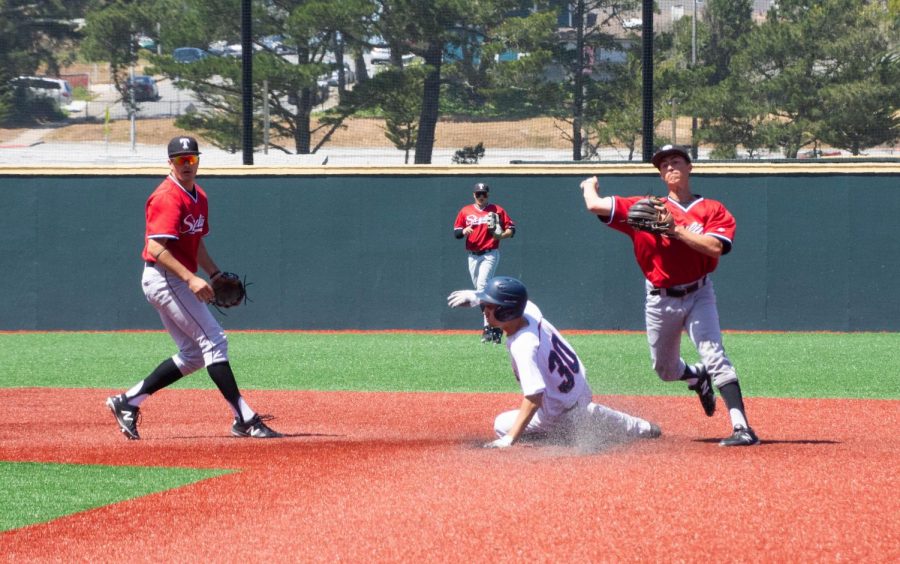 Phil Anderson and Anthony Masetti works together to get an out on a Gavilan player on April 14, 2018.

Skyline looked to turn their season around as they sealed their first conference series win, finishing with two wins in a three game battle against the Gavilan Rams. The Trojans rose to victory scoring four runs while holding the Rams to two.

Skyline was playing an away game at their home field during Saturday’s match up against Gavilan due to Gavilan’s poor home field conditions. The Trojans wore their vibrant red jerseys as they outplayed their opponent on an unusually sunny afternoon.

Skyline came out aggressive in the batter’s box; they grabbed two early runs in the first inning provided by two RBI singles by outfielders Joey Pledger and Kaleb Keelan. Skyline’s execution of their game plan brought them a swift victory.

“We really just stuck with our approach,”said left fielder Keelan when discussing what the Trojans capitalized on. “We just sat opposite field and it worked, piled up a lot of hits this weekend.”

Pitcher Sean Craig was the starter for the Trojans and successfully closed out the three-game series against Gavilan. Craig pitched all nine innings in his second win of the season as Skyline defeated Gavilan four to two. He pitched seven shutout innings before giving up a two-run homer to the Rams’ shortstop Brock Bueno in the bottom of the eighth.

Craig had a phenomenal game; he threw six strikeouts while only allowing five hits and one earned run in his near shutout. Good pitching was essential in Skyline’s initial win against the Rams last Thursday as Derek Flowers and Aiden Yarwood combined for nine strikeouts in the Trojans’ commanding 9-3 victory.

In the first two meetings of the series, the two teams split the games.The Trojans lost their second meeting with Gavilan, that was a part of a doubleheader on Thursday caused by a fog delay this past Tuesday. The Rams’ win propelled Skyline’s heightened performance for the rest of the series.

“That second game we played, we knew we should’ve had,” said Keelan. “So we came out with a fire ‘cause we knew we could take it from these guys, and win the series.”

Skyline will try to turn their season around as they notched their first conference series win, and they will look to build on their newfound momentum. Excellent at-bats from catcher Ramon Enriquez were a driving force behind both significant wins for the Trojans; he had three hits in four at-bats that included one RBI in Saturday’s win.

When asked how he maintained his high level of play behind home base and in the batter’s box Enriquez responded, “Pretty much just staying within myself, and just let the game come to me.” He added, “We took advantage of their mistakes and just banged it.”

The fielding was turbulent on Saturday. The Trojans put their pitcher in a tough position in the fourth inning; Craig hit a batter that put him on first. Back to back dropped fly balls came right after which loaded the bases for Gavilan. Two outstanding catches by Skyline’s third baseman Mitchell Swanson got the Trojans out of a terrible situation.

Skyline’s next conference opponent is Ohlone College and they need to enter the next series with the same aggression they used to close out Gavilan. With five wins and seven losses in conference play. Hopefully a three game sweep against Ohlone would put their record above 500 and put the Trojans in the playoff picture.

“We hit the ball hard, and made the plays,” said designated hitter Jack Kelly. “That’s how you win a baseball game.”