No hype for US Soccer 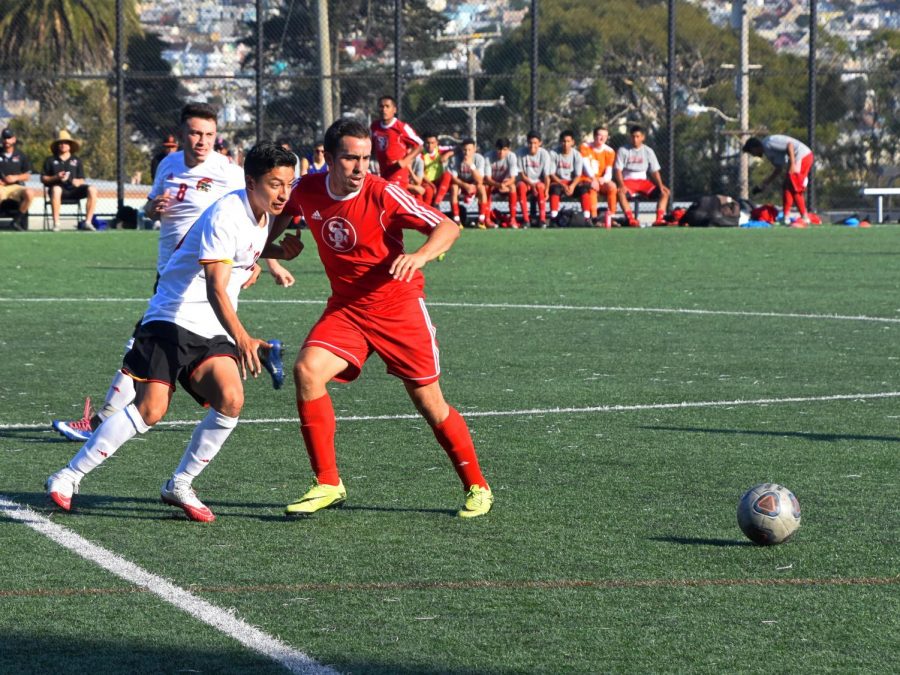 Isai Flores and a City College of San Francisco defender compete for control of the ball on Oct. 24, 2017.

For the last few decades, soccer has been the most dominant sport in the whole world except in the United States.

Here, in the U.S., people tend to cherish World Series games and Super Bowl Sunday that are both annual, while everyone else just waits four years to see the World Cup. The question at hand is will soccer ever be embraced by Americans?

In 1994, the United States hosted the World Cup with a chance of making the sport popular and also to bring in a lot of revenue. According to the U.S. Soccer Federation, the 1994 World Cup brought in 3,587,538 spectators to the tournament making it the most successful that FIFA has ever had.

A year before the big tournament, the MLS was created and with the help of the World Cup, the U.S. Soccer Federation thought that the sport will become an instant hit along with the other American sports.

Unfortunately, the hype of U.S. soccer never had their big break like the other sports did. For example, an MLS cup final, brings in about 803,000 according to ESPN, does not get the same amount of audiences as a Super Bowl does, which is about 103.4 million according to Nielsen, and probably never will.

But on the other hand, according to FIFA, the World Cup draws about 3.2 billion viewers that is more than both MLS cup final and the super bowl. Also, MLS and Super Bowl are most likely only shown in the U.S. while the World Cup is shown all over the world.

Kinesiology major Paulina Campo has been playing for the Skyline soccer team for two seasons now and as a soccer enthusiast, she believes that the sport isn’t getting as much recognition as it should.

“Mostly because they’re more stuck on the ‘traditional’ American way which is watching more of football and baseball,” Campo said. “Soccer is of a sport that’s appreciated mostly in like Europe and South America.”

The main reason why many Americans can’t really embrace the sport is that the MLS is considered to be a league where most of the Europeans stop playing after their golden era is done which doesn’t really attract a lot of people because most don’t follow European soccer.

Fans like Paulina are the ones that help keep the culture of soccer alive here in the U.S. They go to every club game, every national team game, they also tweet about the games, which help bring more attention because they create hashtags so everyone can see.

In 2016 the U.S. Soccer Federation took one more shot at helping to bring the popularity to the sport by bringing the oldest tournament in soccer history for the first time on American soil, the Copa America. This tournament consist of all the South American countries and six North and Central American countries. It definitely did bring a lot of people to the games because world-class athletes that played in Europe were being advertised like Lionel Messi, Luis Suarez, Alexis Sanchez, etc.

“I went to the opening game which was U.S. vs Colombia at Levi Stadium the whole crowd was all Colombians there was one section for the U.S.,” said Campo. “So obviously we are not as committed for soccer as we are for other sports.”

The only problem was that there was barely any American supporters that went for the U.S. most fans went out to support other countries that had the big stars or only went to just experience a very important soccer game that could very well happen once in a lifetime.

The 2016 Copa America did have an attendance of about 1.5 million throughout the 32 games according to the U.S. Soccer Federation. Also according to Forbes, more than 100 million people saw the games either on Fox or on Univision, which happens to be a Spanish network.

U.S. soccer was getting ready to show Americans in the summer that soccer should be considered to be a popular sport in this country and it is worth watching, but unfortunately, they did not qualify and will have to wait another four years to bring the hype back to the sport.

“If they were in the world cup, I feel like more people would watch it and see their country playing and they would go out and drink and watch the game like any other sport,” said Paulina Campo.

Currently, the U.S. Soccer Federation has a bid to host the 2026 World Cup with neighboring countries Mexico and Canada. They will find out if they get to host in mid-May before this summer’s World Cup.