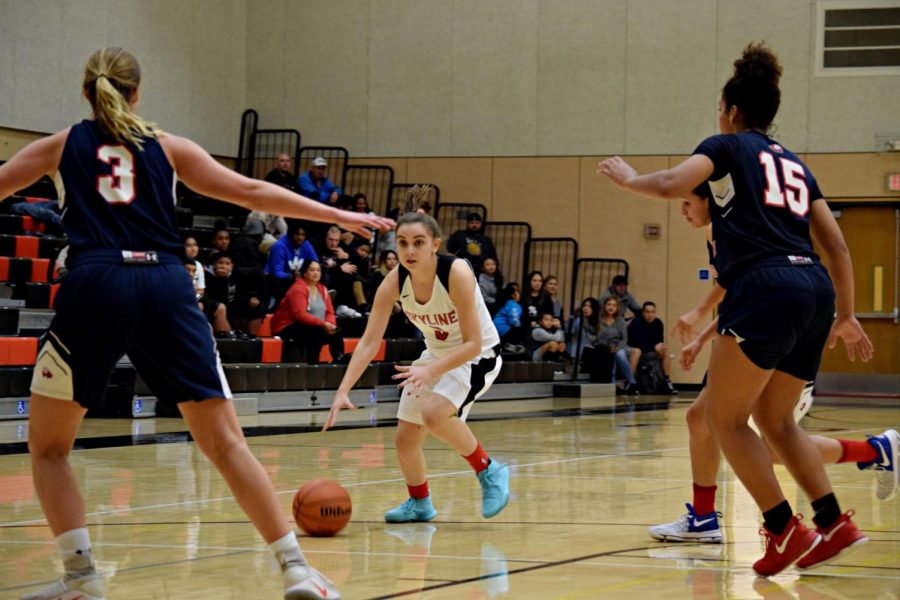 Skyline rolled over Gavilan College on Tuesday November 21 for their first win of the preseason.

Just after tipoff Skyline got off to a quick start opening up the scoring a minute into the game with a layup by Kayla Coloyan and then a possession later a jump shot by number Veronika Akolo, and Skyline started to cruise.

Then around the 7 and half mark in the quarter a Technical foul was called on the Skyline bench. The two technical free throws was converted by Gavilan College. After that technical its start to fall apart for bit for Skyline.

After inbounding Gavilan defence but full court pressure on Skyline forcing them to commit a half court violation by not allowing them to return to half court. Then soon after Galvin took hold of the lead after a three pointer. Then after two Skyline missed free throws led to quick two points by Gavilan. At the halfway mark of the first Galivan built up a 14 to 8 lead.

When asked after the game about hard playing as a team is, Shooting Guard Keri La responded “It takes more getting used to. Team defense we play a lot of man you got to get used to getting hit by the other team and switching off of screens.”

Skyline College manage to stop the bleeding by then end of the first by getting some shots in. Skyline was only down by one possession after the first quarter. Then in the second quarter was a grind between these two teams, three pointer by Skyline’s Akolo jump shot was then immediately respond by a tied three pointer by Galivan half way through the quarter. Then Skyline manage to go on 7 to 2 run to end the half with 29 to 24 halftime advantage.

In the third quarter Skyline’s offense exploded as their offense provided more ball movement allowing for more open kick out shots to their bigs like Akolo and Anaseine Fakava to make jump shots and kicked out for a couple of three pointers by Shannon Chau.

When asked what caused that offensive explosion, Shooting Guard Kayla Coloyan said “We were able to move the ball around and share more. By doing that we were moving the defense. We were able to hit more outside shots.”

In the third Skyline outscored their opponent by nine points for a commanding 18 point lead. The score was 50 to 32 heading to the fourth quarter.

In the fourth quarter Skyline continued their wave of methodical ball movement as the kept kicking the ball the kept on draining their jump shots. Skyline kept the clamps on their defences protecting the basket with their press man defense.

Those quick rebonds would be turned into quick points offensively with those quick post ups by Akolo and Coloyan. Skyline won convincingly by blowing out Gavilan College 65 to 42.

Kayla Coloyan said after the win “Boost our confidence for our play. After losing the first two games they practice more on their offence and ball movement. It was cool to see it come together tonight.”