An in depth look at the coaching staff 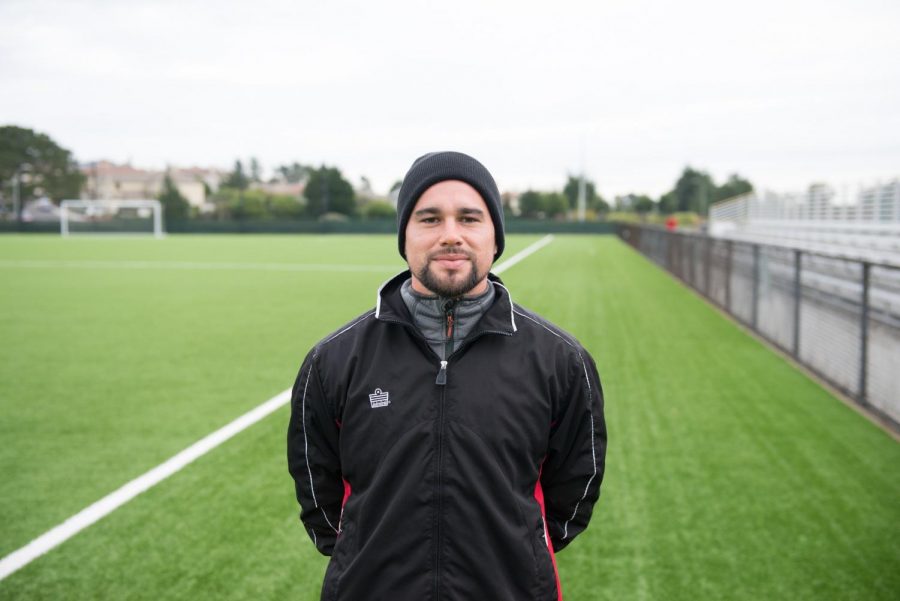 Assistant coach Stephen Cordova stands in front of the field before practice on Nov. 15, 2017.

It’s early November and San Bruno has been colder than usual, with a mild sprinkling earlier on the Tuesday morning. The smell of fresh turf is still lingering on the soccer field when it hits one past noon, when the Skyline Trojan men’s soccer team is getting ready for their routine practice. Right at the corner of the field is the team’s assistant coach, Stephen Cordova, chatting with one of his team players before the practice begins.

“I’ve been coaching since I was out of college in 2010,” said Cordova about his coaching experience. After graduating from San Jose State University, Cordova had been training soccer players, ranging from little kids in high schools to junior colleges. “This is me and Gabe (Saucedo)’s second year in Skyline and there are a lot of great players out here.”

Cordova believed that players in college are more mature and have a more focused goal than his younger trainees have had.

“Once you get to college, there is an expectation of professionalism, almost a little pressure to get better,” Cordova said. “Here (Skyline College) is more business-like and competitive.”

As the clock hit 1:30 p.m., the team wastes no time and begins their warm-up practice. Cordova is in the center of the field, practicing along with his team. On the contrary, there is no yelling or screaming of instructions. The team seems to know what they are doing without any orders from the assistant coach.

“They’re doing really well, winning records, making playoffs, not easily, without a doubt we are in playoff,” said Cordova about his current players and the near future of the team this season. He believes that his approach is working because the boys are responding really well and the result shows.

The team seems to agree.

One of the forwards of the team, Ruben Romero thinks the coaches played a major role in guiding his crew towards victory. “We made it to the playoffs,” said Romero. “We are definitely heading to the right direction under the coaches.”

Cordova also thinks that his team is bonding through the semester because of the time they spent together, on and off the field. “They are getting closer even though it is late in the season. They are still making new friendships.”

There is evidently chemistry among the players during the practice as they are able to send signals to each other without exchanging a word.

“The main thing Stephen has taught me was to keep my composure in the field,” said Alex Gonzalez, one of the defender. “Sometimes I get a little heated in the field and got a little tense, and he reminded me to stay in the game because the team needs me. He makes me a better player.”

The competitiveness among players made Cordova’s job easier because he knows they are driven and have their eyes on the prize. He feels the compassions from his team, even though some of them might not get the chance to play on the field sometimes. He knows his team works hard. They spend roughly an hour to two practicing three days a week. Some weeks they will go as far as 20 hours if they have a match.

“They get tired at the end of the day and you can see the intensity drops,” Cordova said. “You gotta switch things up and re-energize them.”

As for aspiring soccer players out there who wants to make it to a team, here is Cordova’s advice: be ready to work and compete.

“If the kids are showing interest, make sure they are ready to be in a very competitive atmosphere and work hard and want to improve. The last thing a coach wants to be in the field is a kid who comes out here and think they don’t need to get better,” Cordova stated. “There is always rooms for improvement.”