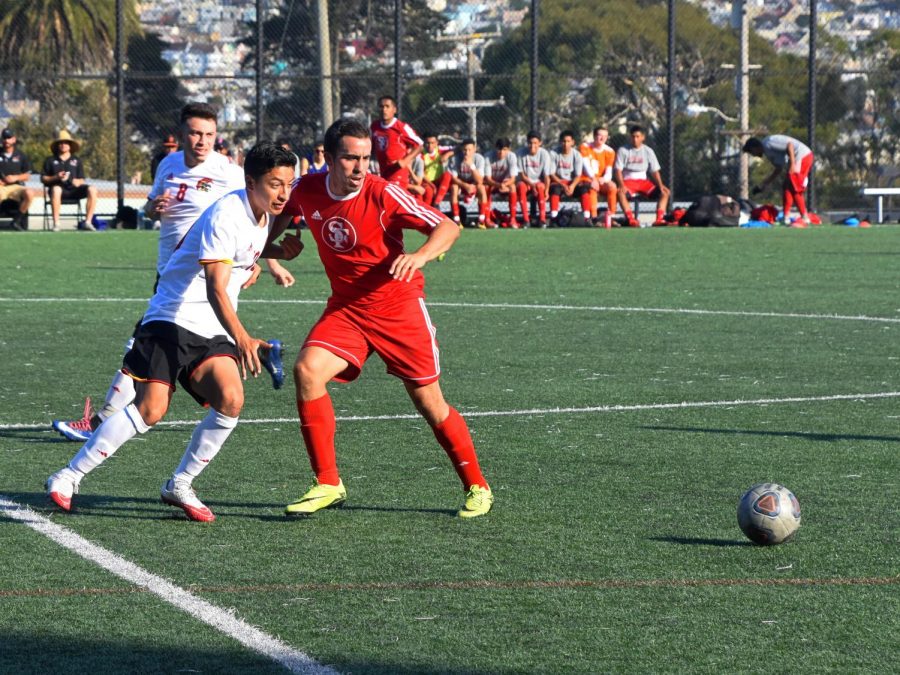 Isai Flores and a City College of San Francisco defender compete for control of the ball.

Skyline Trojans defeated CCSF Rams at the men’s soccer game, by a final score of 1-0.

The game took place at City College of San Francisco on Tuesday, Oct. 24. It was a rather unusual hot weather, peaking at 91 degrees Fahrenheit.

“The heat was definitely a challenge,” said Gabe Saucedo, coach of the Skyline College Men’s Soccer Team, regarding of the severe weather.

Saucedo was right about the effect of the weather. Players seemed to be overheated and no goals were made past 16 minutes into the game. Both teams at this point possessed the ball for an equal amount of time and all the players were getting more intense as the time moved close to break time. Trojan’s midfielder Johnny Hernandez made scoring attempts early in the game but his efforts fell short when the ball was stopped by the Ram’s goalie. However, his works were not lost as the goalie was getting more off-guard, opening rooms for Hernandez’s teammates to make a move.

That strategy seemed to work as the Trojans scored the first goal of the day as the game was close to break time.

“I want to thank my teammates for working so hard,” said Isai Flores, the midfielder who made the goal. “It was definitely a team score, not just the player’s.” The goal definitely sparked up the competition as players were getting more intensified, prompting more fouls and penalty kicks throughout the match.

As the game reached half time, Flores’s goal remained the only score of the game. When the second half started again, tensions among players soared. With only 20 minutes left in the game, players from both teams were playing aggressively, with the Rams attacking the goal at any given chance they got. The Trojan did not back down and played defense well.

At the 63 minutes mark, Ram’s defender David Salas possessed the ball but he failed to deliver it to his teammates, as Trojan’s Flores and Toshi Hensley tackled and swept the ball away from him. This prompted the referee to whistle for a penalty kick but the Rams still did not manage to score.

By 73 minutes, it became clear that the Ram was determined to catch up with Trojan as they got more physical and aggressive. At one of the last few attempts to goal, the ball hit Trojan’s keeper, Osvaldo Barrera hard. The game was put on pause as medic was called to the field to examine his injury.

“I stayed in even thought I injured myself,” Barrera said. “I had to push through for the game with only fifteen minutes left.” He was approved to remain in the playoff and did his best to secure the win for the day.

“It was a nice win,” Saucedo said. “I wouldn’t say it was our nicest play, there were a lot of fouls and this setup is a lot different than our usual field. It is smaller here.” Saucedo also pointed out that the opposing team was strong and he was proud of his team for defeating the undefeated. The CCSF team had been on a winning streak for the previous five games they played, until now.

“In the end, we got the big W and that’s what matters.” Saucedo said.