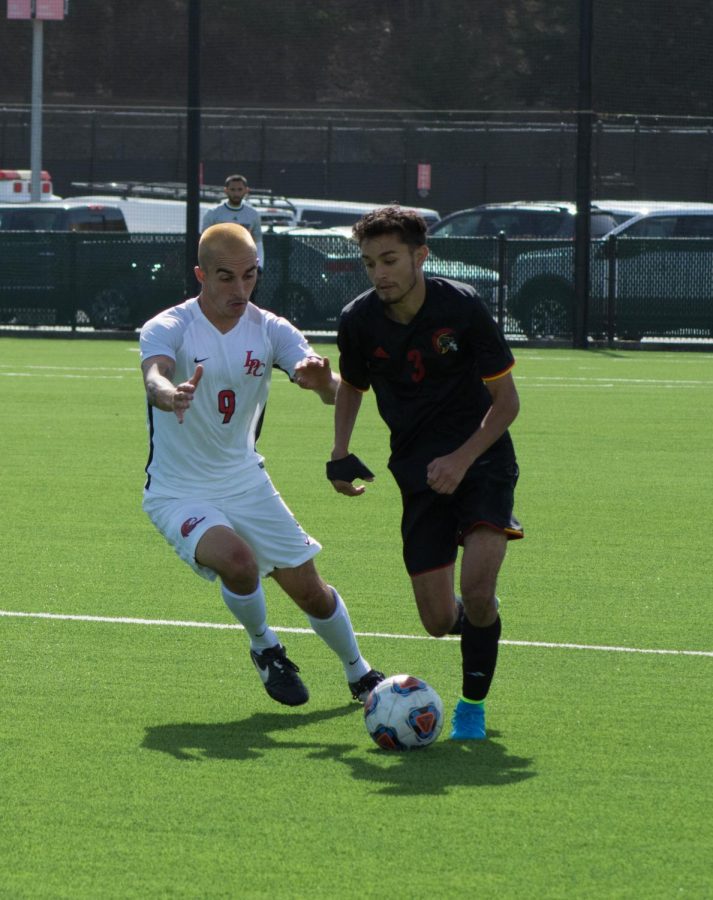 Alex Gonzalez dribbles past his defender to try and score a goal.

Skyline Trojans played with hustle against Las Positas College Hawks this past Friday, with a tied score of 2-2.

At the start of the first half, Las Positas scored against Skyline by #9 Jake Foscalina, during the last 10 minutes. Skyline didn’t allow that to bring them down, they hustled harder and caught up with a goal short after by #5, Herminio Umanzo, who kicked it in from the left side of the field after a quick hustle.

“When I have opportunities , I take them” Umanzo said when asked about his process.

Umanzo had been a forward in soccer when he was younger but his current position on the Skyline soccer team is defense, which he feels he is better at. Usually, he barely gets to go up on the field but for Friday’s game he had the chance and he took it who didn’t disappoint no one. It was the first goal he made in the season which he said was really exciting.

Skyline’s defense was persistent every time they had possession of the ball. They were active and pressured but did not let that get to them as they looked up every time and relied on their teammates for support.They passed the ball from left to right to get a better strategy set up that lead them closer to a goal, it gave them time to see their options. They also had great passing between each other.

Throughout the game, the Trojans were in difficult positions in which they were outnumbered by two or three players but with their quick feet and control it allowed Skyline players to come out and move forward from those situations.

Joey Galvarez, #8, was one of the players that was in a difficult positions were three opponents were on him to take the ball, but he fooled them with his quick feet and fast dribble.

The bleachers which had a lot of supporters from both teams were yelling suggestions and advice to those who were playing and they even yelled at the referee’s who took their time whenever they used their whistle.

During the first half, the same referee, lost his balance with the quick movements of the players and fell in the middle of the field and a few minutes had to be dedicated to him to make sure he was fine.

Throughout the second half two goals were made first by #9 , Jake Foscalina again, from Las Positas College and one by #10, Isai Flores, from Skyline College on the last few minutes of the game.

Head Coach Gabe Saucedo felt that the Trojans had a good start to the season, “We were able to move the ball from difficult positions.”

On the seconds goal from Skyline , which was on the last few minutes of the game, the goalie from Las Positas, #1 Brannon Dwyer, had tried to grab the ball as it was getting closer to the goal but the ball slipped and Flores took the chance and kicked it into the goal, leading the game into a tie.

Even though the Trojans didn’t win there were a few things that some player noticed that could have helped them.