Trojans fall short to the Colts 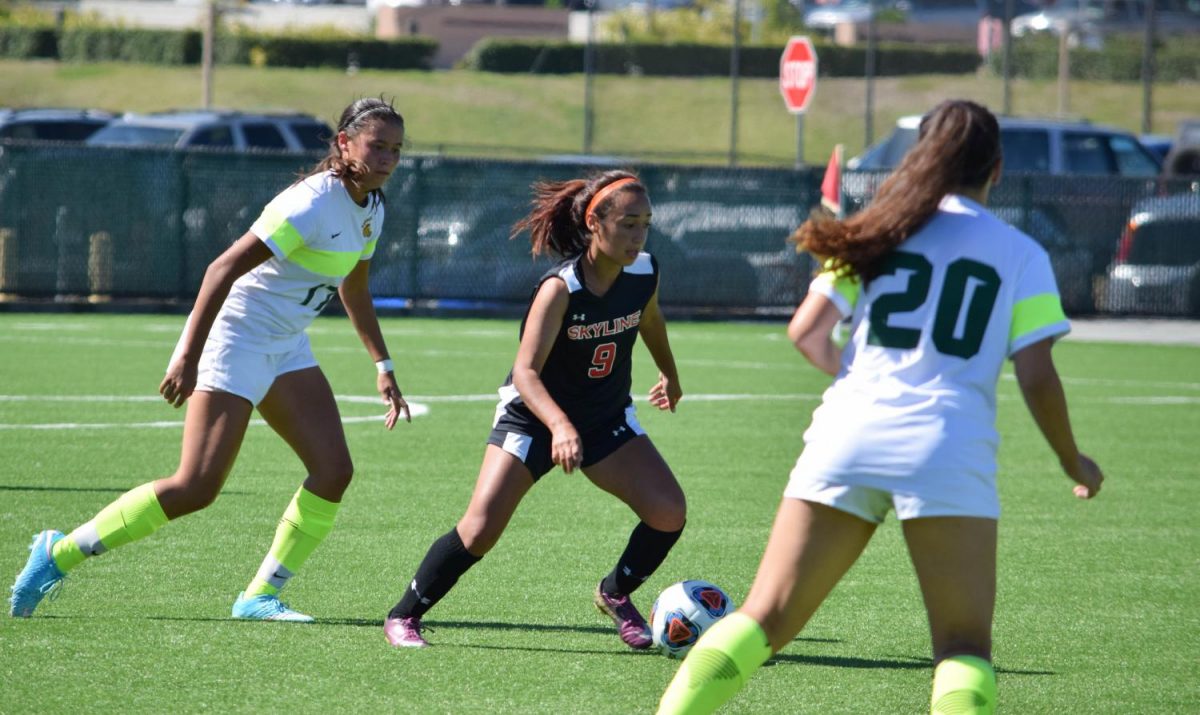 Maria Cazares dribbling her way through defenders to try and score a goal.

The Skyline Trojans fell short on Tuesday Sept. 26 to the Cañada College Colts with a final score of 2-1.

Skyline had a slow start to the first game of the season. Cañada’s strong offense had Skyline playing on the defensive for most of the game.

Trojans got a goal in the first half after #9, Maria Cazares, launched a free kick into the corner of the goal. Not long after the Colts retaliated with a goal by #17, Hannah Plackowski. What slowed down the Trojans was not charging the ball, leaving opposing players open, not controlling the ball, and a weak offense.

Colts’ forwards were aggressive and would plow through the Trojans’ side of the field. By not fighting Colts’ players for control of the ball, the Colts were able to take a lot of shots on goal. Skyline goalie Ashika Varma, had a lot of great saves during the game and tried to rally her team together. “The team was strong in the beginning,” said Varma. “We fought as much as we could considering the heat and injuries”.

The other problem the Trojans encountered was that many of the players got winded early on and didn’t catch up to Colts players, leaving them open to receive passes. With no one to guard them or block passes, Colts had free reign on the field. Trojan players struggled to catch up whenever the Colts had a break away. “What’s letting us down is fitness and ability to finish 90 minutes,” Coach Corsiglia said to his team after the game.

When the Trojans did have control of the ball, Colts players would fight them for it. Under duress, Trojan players would usually kick the ball out or away to keep from giving the ball up. However, this meant the Colts gained a lot of ground because of throw ins and whenever the Trojans kicked the ball away, it was usually kicked without direction into an open spot where Colts would take control of the ball. “It was hard to score when we were defending so much,” Coach Kevin Corsiglia said. But he emphasized that “we can play with anybody.”

The Trojans’ early goal had the team feeling good but they were unable to keep up their lead because they were constantly being battered by the Colts.

In the second half, the Trojans came back with more energy but were making a lot of the same mistakes that got them into trouble in the first half. There was more support of their forwards so they were able to make some gains on the field. But the majority of the second half was played on the Trojans’ side of the field.

Due to the pressures that the Colts put on the Trojans, they had an own goal. This negatively affected the Trojans which was made visible in their performance. “We kind of gave up,” said team captain Paulina Campo.

As for what they would hope to improve, Campo said they’ll “work on attack, having a stronger mentality for next game.” Varma would like to see the team “moving as a unit”. And in Coach Corsiglia’s after game huddle, he inspired players to “play for the team, for each other, not for [him].”