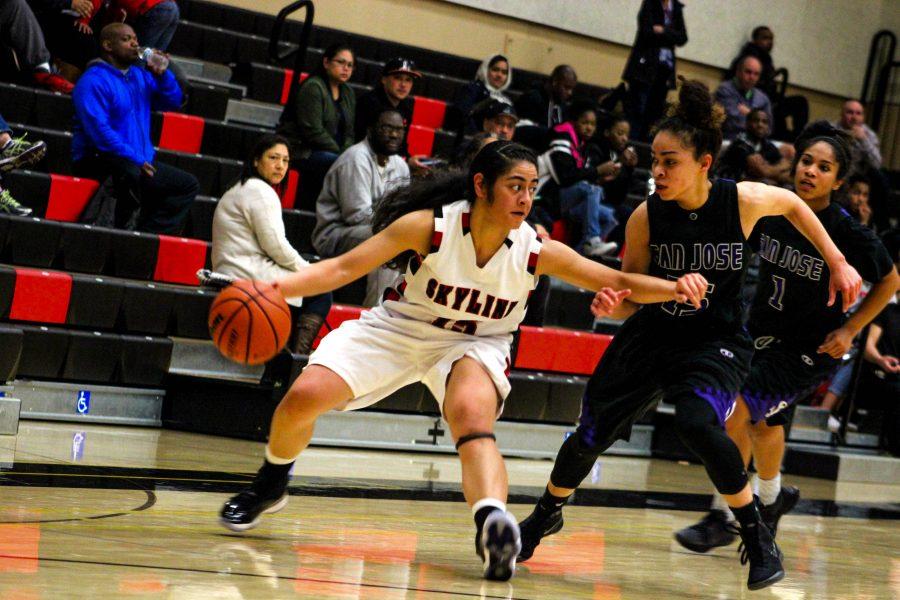 The team pushed the pace against a tired San Jose team to an 83-63 finish. Skyline’s Victoria Langi led all scorers with 30 points, while shooting 10-14 from the field. Skyline had another strong performance from Arianna Sheehy, who had a double-double with 10 points and 12 assists.

Langi got it going early scoring 16 of her 30 in the first half. Skyline continued to swing the ball towards her side where she found open shots against the tired defense.

Langi is second in the conference in 3-point shooting and added to her tally by adding eight more 3-pointers against San Jose.

Sheehy also played well, doing a little bit of everything on the floor. She finished the game with five rebounds, 12 assists, three steals and 10 points. Sheehy was able to drive baseline on the defense and find open shooters all game, which led to her high number of assists.

In the start of the second half, San Jose City found a second wind and was able to score 20 points in the third quarter. Skyline seemed to struggle early against their trap defense and were giving up possessions, which led to layups on the other end.

A timeout by Head Coach Christopher Watters allowed the team to settle in and make adjustments to the trap. Coach Watters kept the team playing fast but under control to the finish of the game, where he tired out the short-handed San Jose City team.

“We planned on pushing the tempo to try to wear them down over the course of the game,” Coach Watters said. “We knew if we played hard, we would give ourselves a great chance to win.”

San Jose City didn’t have enough bodies to compete in the match-up, only having five dressed players. The team even played some possessions with only four players on the court to give short breaks to their exhausted players.

Regardless, Skyline as a whole put together a fun brand of basketball, along with Langi’s hot shooting night. The team had two other double digit scorers with Kaimani Perez with 15 points and Veronica Akolo with 14 points.

“The team has really improved as the season has progressed,” Coach Watters. “The girls have worked hard and believe in each other. They are not only good players, but also good teammates.”

The team will look to close the season off strong going down the homestretch with a game at College of San Mateo on Feb. 15, and their last game of the season at home against Las Positas College on Feb. 17.