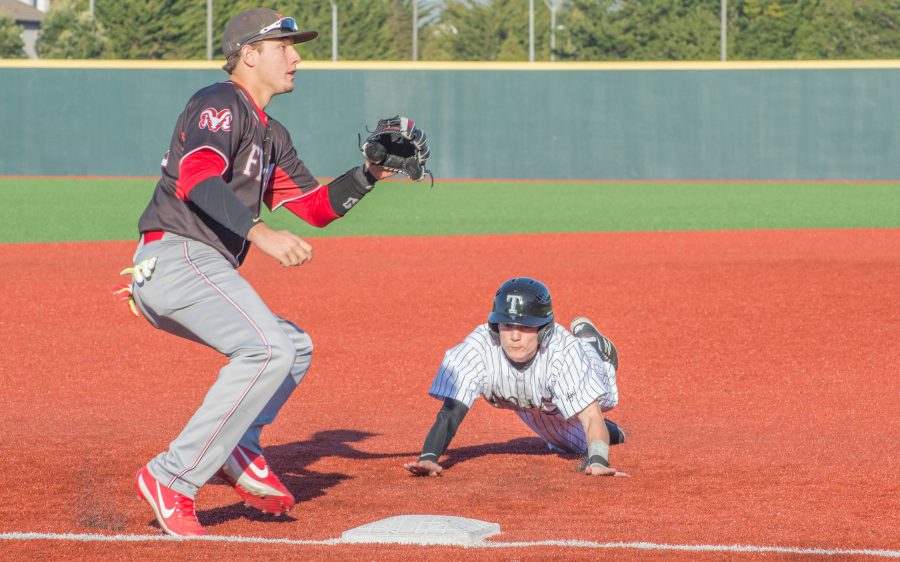 Harley Torres slides to steal third base against Fresno City College on Jan. 28, 2017.

The Trojans beat the Fresno City Rams 3-1, upsetting the third ranked team in the state. In the bottom of the eighth inning, a big decision to bring in pinch runner Harley Torres proved to be the difference in the game.

“It’s a decision we would make about 99 percent of the time,” head coach Dino Nomicos said. “We wanted to get him on to steal second or get him in scoring position.”

With one out in the eighth inning, Torres’ base running sparked the offense, giving the energy the team had lacked throughout the early part of the game. Torres stole second and third before eventually scoring off of Brennan Carey’s single.

“They count on me to run,” Torres said. “I guess I’m a little fire starter. After my stolen base, I saw my whole dugout explode in cheers. Then that at bat that Cole March had and that sparked even more wildfire in the dugout.”

March was able to find home after Fresno’s catcher Kyle Adkins could not control a pitch. Carey also advanced to third where he was able to score the last run of the game after Aaron Albaum’s pop fly.

Starting pitcher Ray Falk gave up a run in the first, but worked himself into the game. Despite giving up the run, Falk pitched his way out of some scoring threats. With bases loaded in the top of the fifth, Falk forced Fresno’s Sal Esparza to fly out to first base.

Cole Watts was credited with the win, and entered the game in the top of the eighth. Watts finished the game giving up zero hits while striking out two batters.

“They came ready to play today,” coach Nomicos said. “And we got a strong pitching performance from Falk and Watts.”

With the win, Skyline upsets the number three team in the state, and avenges their loss against Fresno from the first game of the season.

“I think yesterday we had some jitters,” coach Nomicos said. “First game, playing the third ranked team in the state. Basically we squared it away after the game in the locker room.”

In what was an impressive win, Skyline showed that they had a pulse for the season after a discouraging loss the game before. The team remained poised the entire game and were not overcome by the moment as they had been the previous game.

“Yesterday was definitely a tough loss,” Carey said. “I’m really happy with the way we bounced back. Our next game is Tuesday, and I think we’ll be ready going into that one.”

Since the game against Fresno, Skyline closed out close games. On Tuesday, Jan. 31, Skyline held on to win (5-4) against Cosumnes River College.