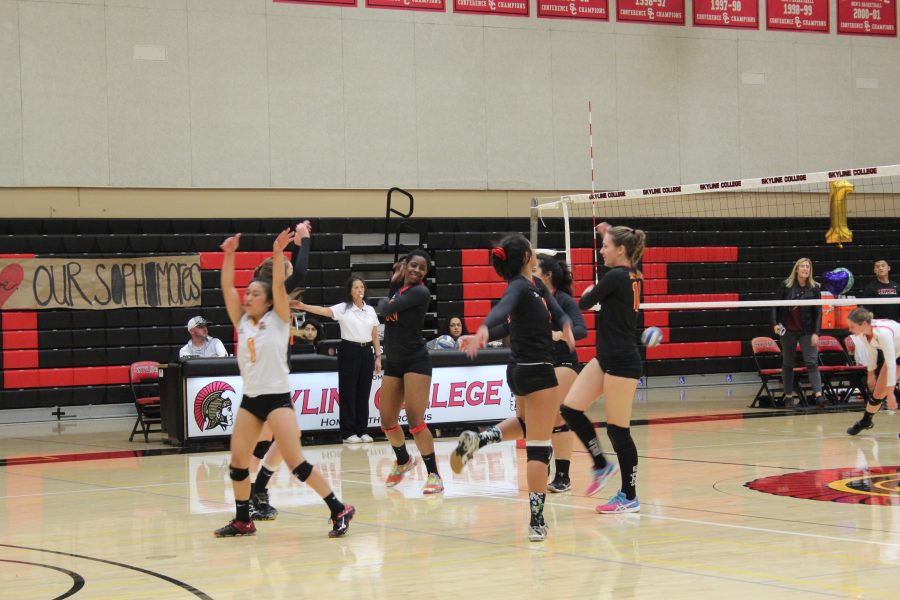 The team celebrates as a group after a score against Foothill College on Nov. 23, 2016.

The lady Trojans took a loss in their final game against Foothill, ending their series with a 7-18 record on Wednesday, Nov. 16.

The first set of the game was a close one. Skyline was able to go toe-to-toe against their opponents. Skyline’s blocker Jaichelle White, outside hitter Justice Afatasi and middle block Marisa Kealoha did their best to stop the Foothill offensive but it wasn’t enough.

The second and third sets tell the same story. However, during the last minutes of each set, the Trojans had trouble covering the floor to properly defend. As a result, Foothill’s offense just flowed like water and Skyline struggled to dig many of the opponent’s spikes.

Skyline’s freshmen did their part during the game but it just wasn’t enough to win a set. In particular, Skyline’s middle block Raja Elliott made a few offensive as well as defensive plays.

“I’m really grateful for what the freshmen did for this game,” Skyline’s team captain Marlene Alcantara said. “I felt like we had a lot of energy during the first half and it just died down later on.”

On the positive, Skyline’s offense was up to par against Foothill, the visitors defense was just better in the last two sets. Afatasi did a fine job attacking but was usually halted by the other team’s defense.

Overall, Skyline’s downfall was in their defense. They had some trouble covering the floor. However, they have had improved on their hitting errors and reduced them.

Skyline’s sophomores also celebrated their last game during this match up. Some are looking forward to moving on to the next level.

“I am planning on playing on the next level,” Alcantara said. “My top choice right now is Bethany College and if I don’t get any better offers after the sophomore showcase then I will go with them.”

The sophomores expressed their good experience while playing for Skyline. A tough season like this one could have easily driven the team apart, but they stuck it out.

“It was a good season. It is hard to let it go because we’re such a close family,” middle blocker Kaitlyn Giubinni said. “I hope to get recruited somewhere but if not, I’m thankful for the time I had here and continue getting my major.”

“It was bitter-sweet because I love this team,” outside hitter Claire Hardiman said. “I didn’t regret all the losses because I had fun playing with this team.”

Hardiman will be staying to help during practice until she is ready to transfer.

As the team says goodbye to their crop of sophomores, the freshman are ready to step up for next season. Afatasi, and Kealoha will look to lead the next group of freshman to improve upon this seasons results.