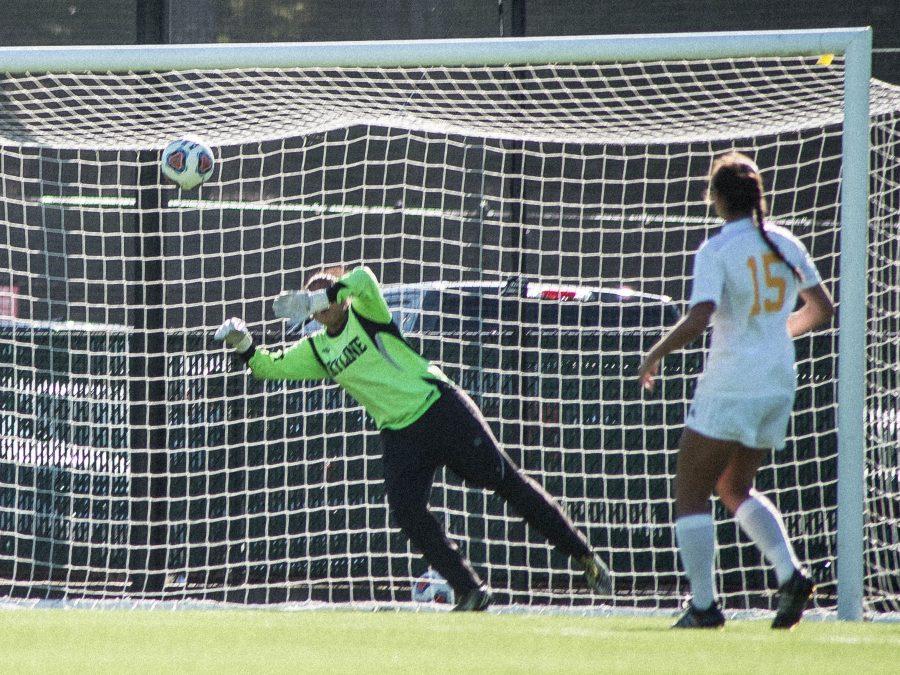 Skyline goalie misses the save against Hartnell’s Megan Hertzog.

Skyline College’s women’s soccer team dropped its last home game of the season against Hartnell College on Nov. 4, with a final score of 2-5.

The score, however, doesn’t show how much heart and adversity this Skyline team displayed. They were going up against the best team in their conference and didn’t have any substitutes available to them.

The starting eleven had no choice but to play the entirety of the game. Skyline faced a 3-0 deficit at halftime, but came out the half with an energized offense to cut the deficit to one goal after scoring their second in the 80th minute.

“We’ve just been a better team in the second half of games this season,” forward Maria Cazarez said on the teams rejuvenated offense coming out the half.

Their efforts came up short, as soon after Hartnell responded with back to back goals to ice the game. Despite giving up three goals in the first half, Skyline’s defense had numerous key tackles and interceptions.

“It was the defensive mentality we had coming into the game,” forward Dahlia Rodriguez on the defense in the first half. Hartnell was struggling to muster any attacks the first 20 minutes of the game.

“We emphasize a lot on being organized, especially against a team like this,” coach Kevin Corsiglia said.

With no substitutes available to them, fatigue definitely played a factor. Hartnell was able to rotate in fresh players while Skyline had to tough it out. That displayed the tremendous amount of heart they had for this game.

“We were limited in what we can do and who we can do it with,” coach Corsiglia said on not having substitutes available. “Some players had to play out of position.”

The players can hold their heads high after this game, but the overall season was disappointing. Skyline finished the season with a 5-11-3 record at the bottom of their division. Optimism is now being looked towards next season in hopes of a successful season.