Derek Carr is the mid-season MVP 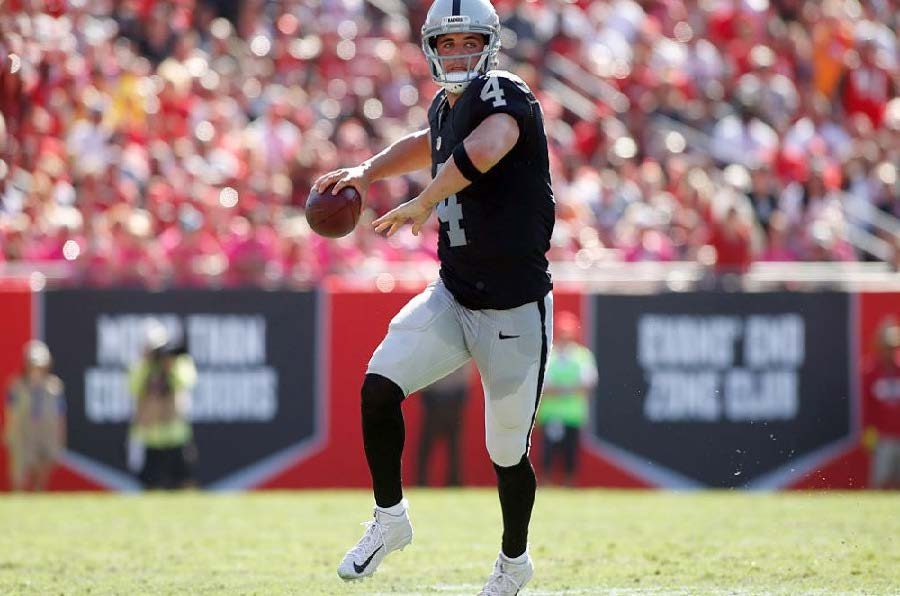 Quarterback Derek Carr #4 of the Oakland Raiders looks for an open receiver during the fourth quarter.

The Oakland Raiders are 6-2, tied atop the AFC West with the Denver Broncos, all thanks to the performance of quarterback Derek Carr. Without Carr at the helm, the Raiders would likely be winless at this point, which makes him the mid-season most valuable player.

No other player has had to carry the same weight and performance as Carr has. He’s led the team on three game-winning drives already. During those drives, he has looked poised and dangerous.

What is dangerous about Carr is that he can deliver the ball just about anywhere he wants. It helps having Amari Cooper and Michael Crabtree as your starting receivers, but Carr is good at spreading the ball around.

What doesn’t help him is his run support and defense. The running game hasn’t been bad, but it hasn’t been stellar either. That is more so in what offensive coordinator Bill Musgrave wants to do. When you have Derek Carr as your quarterback and elite receivers, of course you’re going to favor the more talented and stocked up side.

The running backs are good enough to get the job done, but defenses aren’t necessarily threatened by anyone of them either.

What really has been holding the team back is the defense which has been atrocious through eight games. They are ranked 31st in the league in total yards allowed and 22nd in points allowed. This constant let up by the defense causes the offense to play catch up in almost all their games.

Through the first two games, the defense had given up a historic 961 total yards and 69 points. Wanted posters of Khalil Mack were being passed out in the stands as he wasn’t affecting games.

The only games in which the defense has really looked stout were against the Titans, Jaguars and Buccaneers. That isn’t really saying much considering each of those is either an average or nearly irrelevant team.

Derek Carr is constantly asked to deliver an elite performance every game and he has come through in almost all of them. He doesn’t take sacks, thanks to his great wall of linemen, and he rarely turns the ball over.

The legendary performance he displayed last week against the Buccaneers on the road solidified this argument. Carr became just the third quarterback ever to reach 500 yards passing and throw for four touchdowns in a game without being intercepted, per ESPN Stats & Info.

In fact, another 71 of Carr’s passing yards were negated thanks to penalties, which would have given him the all-time league record for passing yards. You can blame a plethora of players for that because another record was also broken in this game.

The record for penalties in a game was broken, as the team committed 23 penalties, and those were just the ones that were accepted.

They committed 23 penalties, and yet they still won the game. Carr carried his team to victory once again. Only an MVP-type caliber player can carry his team after omitting so many errors, whether that is in penalties or the defense acting like an open bar.

It is sad to see that the team lives or dies by the performance of Carr, but so far he has delivered with astounding results. With so much pressure on him and to be able to perform at an elite level with it, Derek Carr is the easy choice for mid-season MVP.