Trojans give up early lead against Chabot 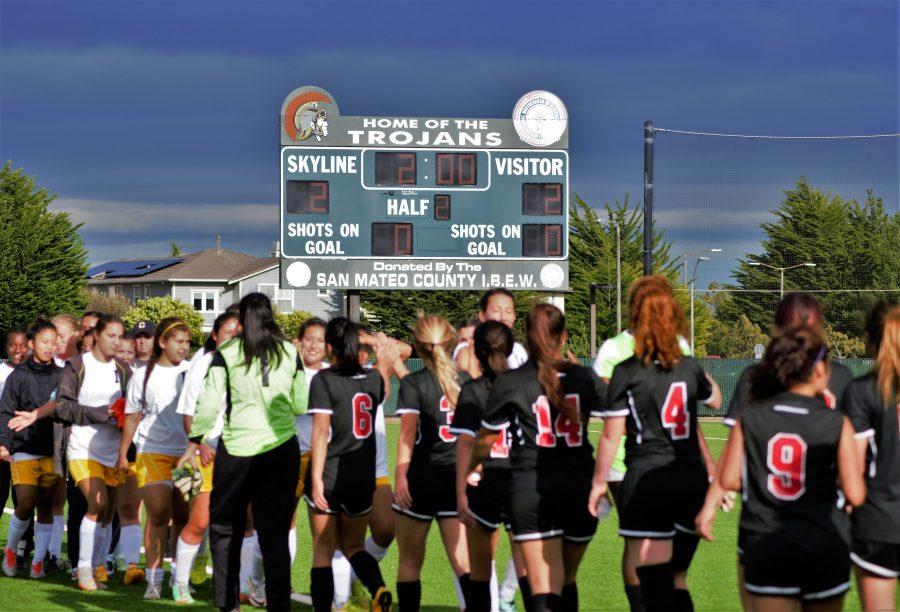 Skyline and Chabot shake hands after a physical game on October 26, 2016.

Skyline College’s women’s soccer team was unable to hold on to the lead against Chabot College on October 25, as the physical game resulted in a tie.

Chabot College played a more physical and aggressive match by keeping possession for most of the game. Skyline’s offense broke free to score two goals, but was unable to secure a winning goal.

“It was good for us to play a team like that,” Maria Cazarez said. “We haven’t played a team that was as aggressive as they were.”

Trojan Maria Cazarez started the game off on a good note when she scored the first goal late in the first half. Yasmine Sahib picked up the momentum by scoring early in the second half, netting Skyline’s second unanswered goal.

In an unfortunate twist of events, Chabot was able to capitalize on Skyline letting their guard down, which resulted in Chabot tyng the game in the second half.

“I think as soon as we scored the second goal, we fell off a little bit,” Sahib said. “We got confident and thought that we already put the team away. Next time we have to tighten up on defense and clean up our passes.”

Coming into the match, the team knew it would be a physical game and fared well with the physicality but could not match it late in the game.

“We knew they were going to be a physical team so we played fast,” head coach Kevin Corsiglia said. “We talked about it. We let them play their style and they got two goals in the second half and tied up the game.”

Even with Chabot’s Bianca Tirado being ejected out of the game, Skyline was unable to benefit from the advantage.

However, the team strives to get better every week despite any difficulties they may be facing.

“We have a small roster so we ask people to do a lot of different things,” said coach Corsiglia. “Unfortunately we’ve had to ask people to do things that are not in their skill set but they’re doing everything they can do to get better.”

As the season progresses, the Trojan’s are beginning to fuse their individual strengths together in order to work as a team.

“I think we’ve improved a lot,” Angelica Portillo said. “You can tell that we’re not individual players when we’re on the field.”

Skyline shows no signs of slowing down the progress they’ve made collectively. They continue to change their gameplay in order to adapt to their adversities.

“I was happy with the way we battled,” Corsiglia said. “It’s about understanding the opponent and we have a new opponent every week so you’re going to have to take on different challenges.”