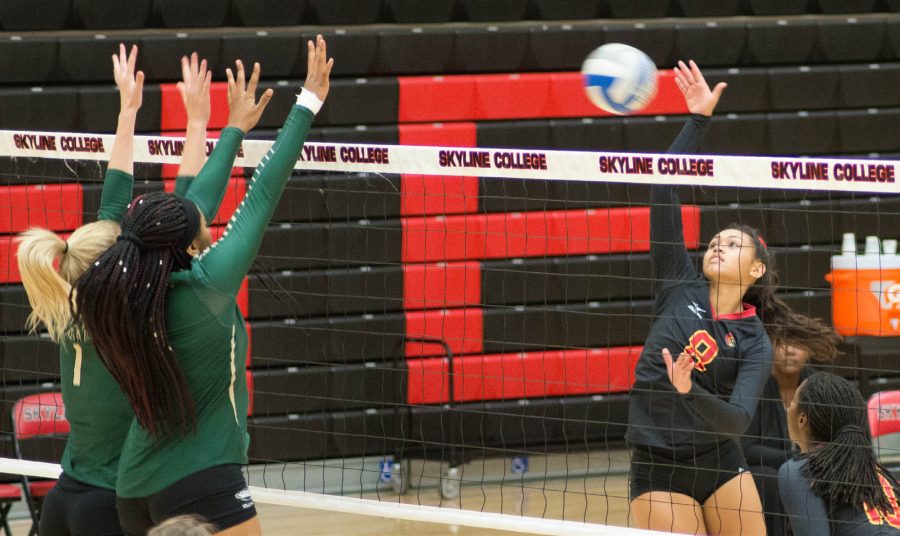 Marissa Kealoha gets the hit and scores over Ohlone college.

Skyline’s women’s volleyball continues to struggle as they take a 0-3 loss against Ohlone College on Friday, Oct. 7, 2016.

During the pre-game warmups, the Trojans didn’t show any signs of weakness, but as soon as they hit the floor against Ohlone’s Renegades, a flaw began to surface.

“We definitely need to work on our serve-receive, our hitting and our serving,” Middle Blocker Raja Elliot said. “We can’t dwell on our errors and must keep a positive attitude all the time.”

Skyline’s first set showed promised with the team scoring four points straight with ease, thanks to Ohlone’s handling errors and Trojan’s outside hitter Claire Hardiman and opposite Marisa Kealoha putting in some early points.

However, their visitors adjusted and flipped the momentum. The Renegades began to overwhelm the Trojans as they began to pour in the points. The Trojans did not help themselves by committing unforced errors as they struggled to establish a rhythm. The Trojans energy level just could not match the Renegades and seemed distracted throughout the set.

The second set was a close battle between the two teams.

Kealoha picked up the intensity as the team began to get her involved in the offense. Skyline’s outside hitter Justice Afatasi sat out for the match-up due to injury, and it was apparent. The team collectively tried to make up for the absence, but just could not catch a break in the set.

“During the past week we lost one of our outside hitters so we have to try and compensate,” Kealoha said.

On defense, Skyline played hard throughout. Middle blockers Jaichelle White and Elliott were in the forefront of their defensive line and their effort persisted through the third set. Lack of communication on defense caused many of the points against Skyline, as Ohlone often found the open spots on the floor.

Even though this wasn’t enough to win them the rest of the required sets, Skyline show signs of a great team”. The main problem during this particular match up was the amount of points that Skyline committed to Ohlone through errors. The Trojan’s overall error during play is their most glaring weakness.

“We work really hard on practices. Our back row is really good so we just need to work on our hitting errors,” Hardiman said. “[After a loss] we always just try to keep our heads up and work hard.”