The sit down heard around the world 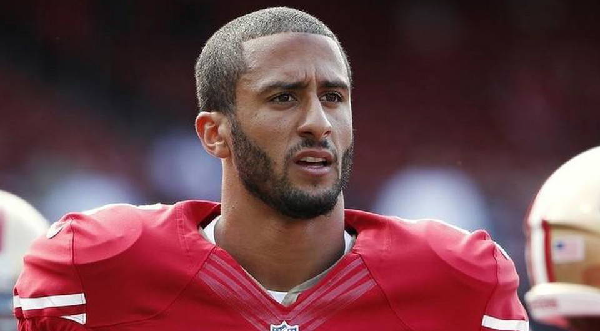 49ers quarterback Colin Kaepernick has a lot to stand for, while sitting down.

Colin Kaepernick’s decision to sit down during the national anthem in the 49ers third preseason game has caused controversy throughout the country. It has spread like wildfire, and the backlash towards it is against Kaepernick.

I fully support his decision to sit down, for the reasons he stated after the game.

“I am not going to stand up to show pride in a flag for a country that oppresses black people and people of color,” he said. However, his reasoning is irrelevant to quite a few sports figures and social media commentators on Twitter and Facebook. They believe he is disrespecting every soldier that has fought and died for this country.

That he is disrespecting what the flag stands for and that he should stand up during the anthem are not the matters up for debate. One of the many reasons soldiers fight for our country is so we can have freedom. Kaepernick is exercising his freedom to protest by not standing during the anthem.

It is not required by law to stand up during it, so to condemn the action to such extremes is essentially stripping him of his right to protest. What is truly disrespectful are the racist tweets people have been sending Kaepernick since it happened.

They is only proving his point. Equality is one of the premises our country’s flag represents, or in this case, is supposed to represent. WNBA players wore Black Lives Matter shirts as a result of numerous police-related shootings. They didn’t receive nearly as much coverage on CNN and Fox News compared to Colin’s sit down.

Kaepernick says America is not great, and people tell him to leave the country. Donald Trump says America is not great and he is one election away from potentially becoming president. There are some people, though, that agree with Kaepernick’s message. But they also believe he should’ve used another method to convey it. One of those methods is to speak out on the subject, but that is all anyone does. Now that we’re talking, it’s obvious what got the ball rolling.

Kaepernick is using his athletic career as a stage to bring awareness, and it has succeeded. Unfortunately, some believe he only sat down during the anthem for attention. That couldn’t be further from the truth because this is not the first time he sat down. He hasn’t stood up for the national anthem since the beginning of preseason. It was only until he got playing time did people suddenly notice it.

In addition, he’s been speaking out on his Twitter and Instagram pages about police violence and oppression as far back as October 2015. He references Malcolm X, Black Panthers, and retweets Shaun King, a Black Lives Matter activist and the senior justice writer for the New York Daily News.

It’s like we’re at the DMV, and we are tired of waiting. People of color want the police to stop the brutality. They want the inequality to end. Everything starts somewhere, hopefully Kaepernicks sit down is what starts it.