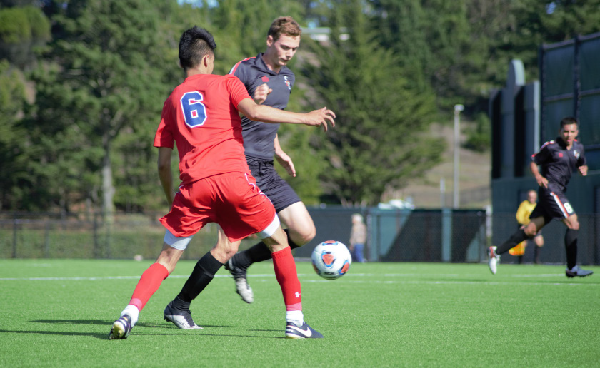 Skyline played Gavilan College on Tuesday, Aug. 30, ending the first game of the semester in a one to one tie.

The team played well, in spite of the lack of experience playing together. Even with the roster filled mostly with freshmen, the men’s soccer team showed great promise in their season opener against Gavilan College.

“Our composure was okay,” head coach Gabe Saucedo said. “But it should be better. It will come with the team playing more with each other.”

Coach Saucedo emphasized pressure as the team swarmed to the ball defensively. The pressure proved to frustrate the opposing team, as Gavilan often looked for calls and struggled to match the tempo in the first half.

“The biggest thing for him is tempo,” Wing player Jason Rodriguez said. “He hates when we walk. He wants us to be competitive.”

The team played fast throughout the first half, showing no signs of slowing down. Offensively, they pushed the ball down the field with crisp passing while keeping strong possession of the ball.

Russell Taylor scored the only goal for Skyline midway through the first half in what was a strong team effort offensively. He attacked wide all game, creating many chances to score.

Skyline had plenty of opportunities to score with many shots on target, but only found one that hit the net.

“We were dangerous early in the first half,” Saucedo said. “We just didn’t finish too well today. I thought we could have put the game away early if we finished a couple of our opportunities.”

In the second half, Skyline struggled to maintain the level they established in the first. Their attack slowed and fewer chances to score were made.

“We didn’t finish the game too well today.” Coach Saucedo said. “Fitness seemed to be a bit of an issue towards the end so we have somethings to work on.”

The defensive pressure that frustrated Gavilan College all day faded in the late minutes of the game. Goalkeeper James Brignoli played a strong game throughout to anchor the defense.

Skyline will look to win their first game this season when they play their next game at San Joaquin Delta College on Friday, Sept. 2.