Trojans silence the Panthers with a win

A clutched inning leads the Skyline Trojans to victory 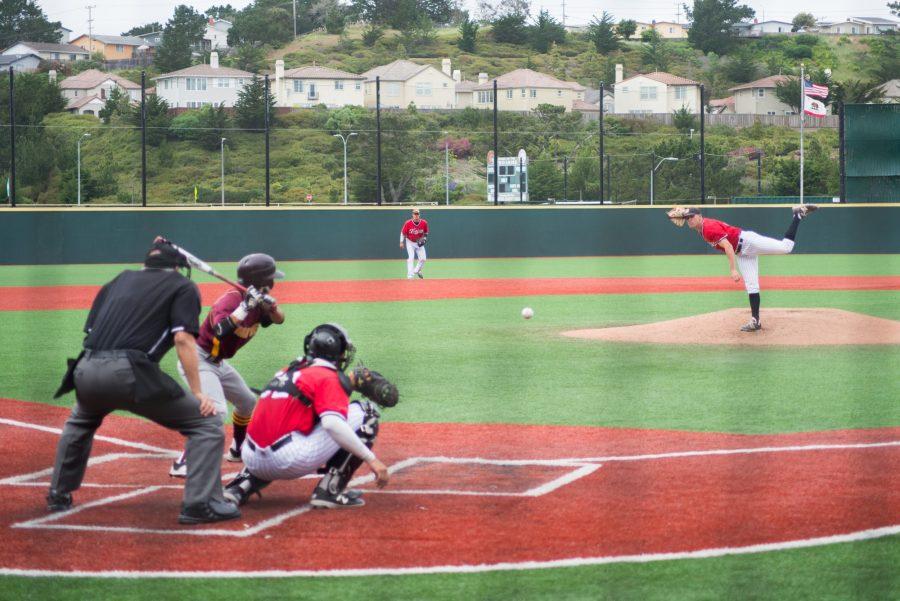 Skyline's starting pitcher Daniel Madigan gave up three runs early in the first inning. Then he fought back, shutting down the Hartnell offense to game's end at Skyline College on April 19, 2016.

With only four games left in the season, the Skyline men’s baseball team took control over the Hartnell Panthers, closing out the game with a score of 5-3 on Tuesday, April 19.

Skyline’s left-handed pitcher Daniel Madigan opened the game with a rocky start, allowing three runs by Hartnell. Skyline countered with hits, but it was not enough.

The Panthers welcomed their scoring teammates into the dugout by celebrating and screaming, while the Trojans remained calm and hoped to turn things around.

With Silveria on second, shortstop Matt Seubert swung next and gained a position on first base after a wild pitch. Brett Berghammer then stepped up to the plate, bunting in Silveria, ending the third inning with a score of 1-3.

Though they trailed behind, the Trojans did not concede. Skyline’s defense was highlighted throughout the game, resulting in a quick shut down of Hartnell’s offense.

“I found a rhythm,” Madigan said. “It’s my job to go back out there and not give up any runs to them and keep the momentum on our side.”

Madigan stuck to his word and no other runs from the Panthers were made after the first inning.

Skyline fought back but came up short in the fourth inning. Left fielder Nick Healey slid into second, giving Skyline’s second baseman Aaron Albaum momentum to build off of.

Albaum was unable to follow through and was tagged between home and first, but this gave Healey a chance to run to third. The Trojans bunted the ball but it was not enough to bring Healey home.

While neither side scored runs for the following three innings, the Panthers held on to their lead, but could not do so for long. The Trojans stole the game in the seventh inning, where quick decisions and smart plays were made.

The team’s synergy began to shine through and this allowed the Trojans to advance.

Hartnell attempted to end the game quicker and brought in their relief pitcher Brandon Granger, but this was a mistake on the Panther’s end.

A base hit by Albaum opened a window to victory and Granger loaded the bases by walking catcher Felix Aberoutte. Silveria tripled, earning two RBI’s. Another hit from Seubert sent Silveria home as well.

Following the three, designated hitter Ryan Kammuller finished off with a double that racked up as the final run of the inning. Skyline was able to pull away from the Panthers, ending the inning with a score of 5-3.

“We just finally got to that side-arm guy,” Silveria said. “He was kind of mowing us down and Albaum the second baseman did a good job starting us off [in the 7th].”

Skyline’s Richard Boe closed out the game. However, the switch did not effect the Trojans’ leading score. A quick eighth inning was pitched and the long anticipated ninth inning arrived.

Boe walked visiting team’s Luis Mendoza, but first base was as close the Panther’s could get to home base before Skyline ended the game with a third out and triumphed with a final score of 5-3.

“We got into a little trouble early, three to nothing and then we got some clutch hitting from some key freshman,” baseball head coach Dino Nomicos said. “Our pitching and defense is our strength and our weakness is our hitting. We have four games left and we just have to do the best we can with them to finish strong.”