Skyline gets slammed by top team in the league 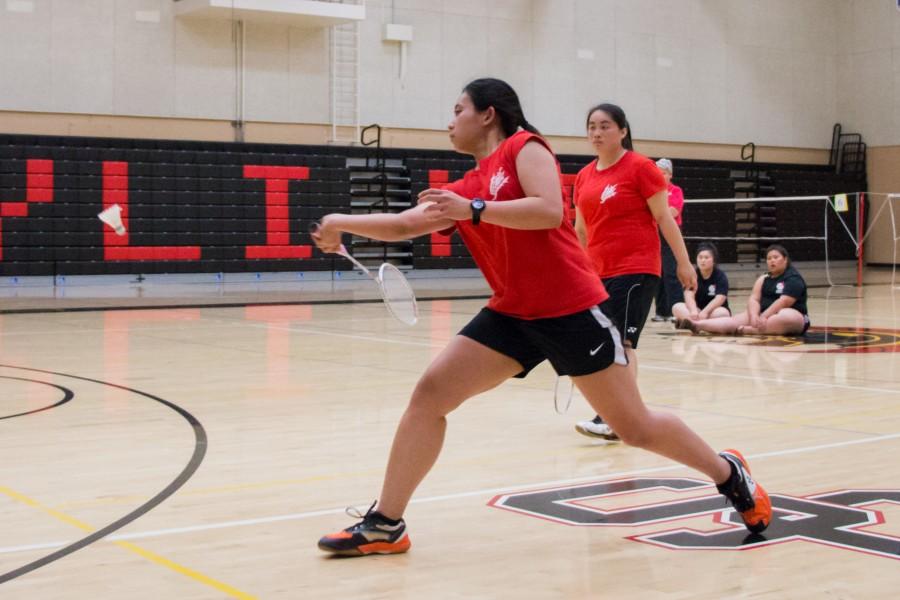 Carla Montanes hits the shuttlecock to rally her opponent in a game against the Fresno Rams at Skyline College on Tuesday, April 5, 2016.

This is the second loss of the team’s very short season, which only consists of eight matches.

Fresno City women’s badminton team holds the title as one the top teams in the entire league right now, and was the college that Skyline was most concerned about facing. This time, the Bulldogs lived up to their reputation. Skyline put up a strong fight but fell short.

“I think we need a little more confidence,” Skyline head coach Jan Fosberg said. “When other teams get off to a fast start in a match, we tend to not believe that we can come back and beat them.”

The game started off with all players given five minutes to warm up against their opponent before actually proceeding on with the game. It started off with a singles game on six different courts. All games were not under any time constraints, so players took advantage of that privilege to pace themselves on their strategies to defeat their opponent.

In the first singles game, Skyline won one out of the six matches.

“I have been trying to better my singles game,” sophomore player Rachel Lum said.

After a short break, Skyline and Fresno City College began playing doubles for three matches. Out of those three games, Skyline battled in matches seven through nine tying in the middle match, but lost to Fresno.

“I tried my best,” sophomore player Karen Lai said. “[I could work on] the mindset, because I personally get really nervous when we’re playing a better team which would affect the performance, but I’m learning to control that anxiety.”

After, the players played one more singles game, followed by one last doubles game.

“At first I felt nervous, but at the end of the last match I felt like I was able to redeem myself,” second year player Carla Montanes said. “For doubles, we tied twice so that’s why we had to play three games. I know I’m a good player. It’s just really my mentality that gets to me. Being able to tie twice today knowing the fact that they’re the best team out of the entire league at the moment, that’s pretty good.”

Overall, the team pushed through, but didn’t come out on top as well as they could have.

“We tried out some new doubles combinations, and I thought Fiona Lai and Carla Montanes played well together and fought hard against a really strong Fresno team,” Fosberg said. “Rachel Lum had some nice singles matches, even though she didn’t come out on top. She worked hard, and really boosted her game.”

Out of the entire game, Skyline player Fiona Lai won both of her singles matches, giving Skyline one point.

“Fiona Lai was probably the player of the match for us,” Fosberg said. “She managed to beat their number one singles player in two straight games, and I believe that’s the first time that the Fresno number one has been beaten by anyone.”