All all-star game worth missing Valentine’s Day for 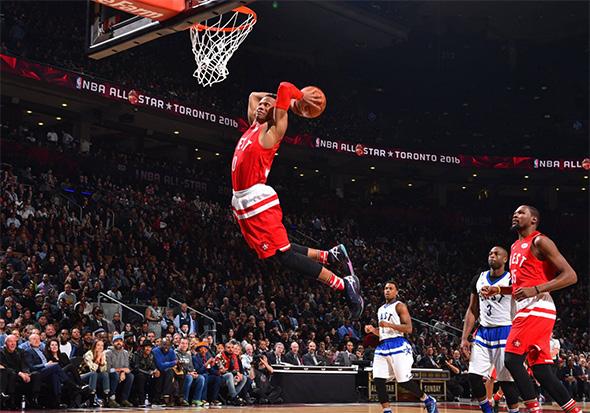 The NBA All-Star Weekend was a rather interesting one this year, especially with it being held outside of the U.S.A., in the hometown of the Raptors: Toronto, Ontario.

There is just so much to talk about from the weekend, from the near-200-point All-Star game, to one of the best dunk contests I have ever watched, to Kobe Bryant’s last All-Star game of his career.

On Friday (Feb. 12), the Rising Stars Challenge went down and team USA beat team World by 3 points(157-154). Zach LaVine also takes the MVP award for the game as well, at this year’s Slam Dunk competition.

The NBA All-Star Celebrity game took place right after the Rising Stars challenge, but really, it was no contest. Of course, Kevin Hart gets MVP again.

Even though the Bay Area’s Draymond Green competed in the Skills Challenge, the Minnesota Timberwolves’ Karl-Anthony Towns went to town and took the crown. It’s also a big surprise that a big man took the win, up against the Boston Celtics’ Isaiah Thomas in the final round.

The Three-Point Shootout was probably the event all of the Bay Area sports fans were looking forward to watching, though. As the “Splash Brothers” went at it again but this year, Klay Thompson took the win beating Stephen Curry by 4 points in the championship round. Either way, it’s a win for any Warriors fan.

The biggest show of the weekend though, the Slam Dunk contest, was really just a battle between the Orlando Magic’s Aaron Gordon, and the Rising Stars MVP, Zach LeVine. Almost all their dunks were something new, and very explosive. Gordon was the one to bring a little more fun to the game, but LeVine proved to be the more athletic one, jumping from the free throw line almost every time. To be fair, Gordon had the most impressive dunk of the competition, basically taking a seat in the air as he was dunking. But Levine still had the most consistent dunks to win the contest.

This year’s All-Star game itself was a little boring, as always. It was just a showcase of offensive skills. I was kind of expecting a three-point shootout the whole game, but it was really a mini-dunk contest. Even Curry was showing off dunks, including a few two-handed dunks. It was really fun to watch old teammates and current teammates show off with alley-oops and plays they used to do when they were teammates. Like Dwyane Wade and LeBron James showing off a two-pass alley-oop. Russell Westbrook and Kevin Durant showcased a few good alley-oops too. It’s weird because most of the three-point plays of the first half weren’t coming from any of the Splash Brothers. They probably had enough “splashes” from the three-point shootout, and pretty much the rest of the season.

It was a close game for the first half, really. It didn’t become a three-point shootout until the second half of the game. It was also at this point that the East All-Stars started to trail behind the West. Three-pointers coming from all the players, James Harden, Paul George, Chris Paul, Pau Gasol, all of them were making threes.

To be honest, I felt pretty bored watching the game because as I said, it was either dunks, or three-pointers. That is the spirit of the All-Star game, but there weren’t really any crazy plays whatsoever. It was a fun game to watch, though, just uninteresting. This is one of the few years that the skills contests were more fun to watch than the All-Star game itself. But even then, the entire weekend, I would say, was a success. It was ultimately one of the more fun to watch All-Star weekends to experience, and it definitely was worth missing Valentine’s Day for.