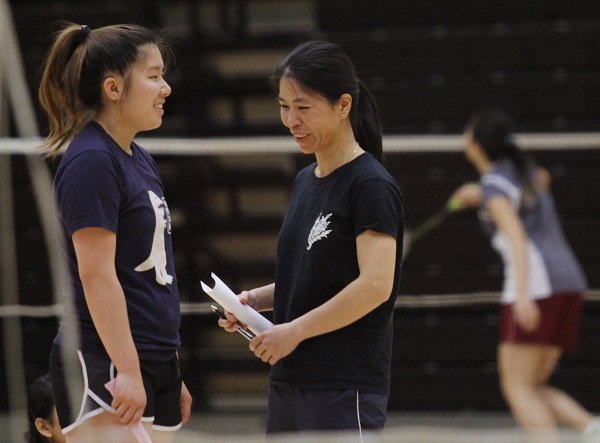 Assistant Coach Anna Nguyen giving advise to a Trojans player during the march 7 tournament between matches.

As March begins and the community college basketball season comes to an end, the Trojans badminton team begins their season, which, like many sports, includes training to prepare for the months and weeks leading up to the first game of the season, in addition to adjusting for weakness that were discovered during last season and finding solutions to them.

“It’s been going well,” said Jan Fosberg, Skyline badminton coach. “We’ve been emphasizing conditioning and strengthening this year to avoid injuries, and just to make us as strong as we can be on court.”

This season, the badminton team sees the return of two veteran players from last season, MJ Phan and Emily Ly, while welcoming plenty of new freshmen to the team.

“We have a pretty young team,” Fosberg said. “We have two returners. Our first returner is MJ Phan, who was our number one player last year, and last year she qualified for the state championship in both singles and doubles, so you know we’re obviously working towards getting her back to that same spot. Our second returner is Emily Ly.”

She added that while the rest of the team is made up of freshmen, some of whom are inexperienced, the team is working hard to keep that from being an issue.

This season’s team is made up of nine players, including the two veteran players. For the freshmen, the March 7 tournament involving De Anza, Mission, Fresno, and Pasadena colleges was their first taste of badminton at the community college level and a chance to get some experience before they have first official match of the season on March 17.

Returning player, Emily Ly, is confident about the upcoming season.

“I’m looking forward to it,” She said. “Let’s see, we have two sophomores, me and MJ, and the rest are all new, but we have a good team this year and I believe we can do it.”

MJ Phan, the teams other returning player, is looking forward to the upcoming tournament as a chance to find out what teams they will be playing against, and to get a feel for the upcoming season.

According to Emily Ly, the team began getting ready for the season in the first week of February. Since then, they’ve been practicing every evening in the gym Monday through Thursday from four to six without fail in order to get in shape and ready for the season.

Of course, players can always use the off-season to get ready for the next season. Freshman Karen Lai decided to begin her preparation last September by taking badminton classes at Skyline and going with a friend to Bintang Badminton Academy to practice.

According to Coach Jan Fosberg “our goals always involve getting people into the state championship” when she was asked about any overarching goals for the team as a whole. A goal that was achieved last season in spring 2014, when the team made it to the state championship with MJ Phan ranking sixth place in the single and fourth place in the doubles, with fellow teammate Clarisse Domingo.

So until March 17, the Trojans badminton team will continue to practice from Monday to Thursday in order to ensure that they are ready for the first official game of the spring 2015 season.