A win for the weekend 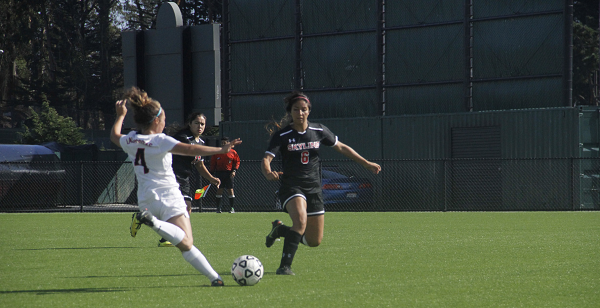 The Skyline women’s soccer team played hard this past Friday resulting in a 1-0 win.

The atmosphere on the sidelines was tense. The entire team seemed on edge as the game stayed at a constant tie. The ball spent an equal amount of time on either side as the offense gained and regained possession.

The majority of the game was tied 0-0 against Las Positas College. Both team’s goalies were on their toes, evading and halting the repeated attempts from the forwards.

The game was a running match between each team, where the forwards were pushed throughout it all, making multiple attempts to take the lead. Deandra Thomas (number 16) and Ileana Moncada (number 14) were seen straining forward and circling back with the rest of the team, working to keep the ball in their possession.

Many attempts at goals from both teams were intercepted by the goalies. Skyline’s goalie, Stacie Garcia (number 1), foiled multiple strong attempts by Las Positas College, keeping the tie until the end.

Within the last four minutes, Thomas took control and rushed in for the goal that gave Skyline the lead. The sidelines erupted with cheers and it seemed like everything paused for a moment and everyone absorbed the energy. With the boost from the goal, the girls held onto their power and strength and kept the opposing team at bay in the last few minutes of game play.

The game ended with a score of 1-0; a close win for Skyline.

Cheers and condolences were exchanged between teams, before Skyline hustled to a corner of the field with their coach and assistant coaches for a review of the efforts that took place.

With serious faces all around, the girls held their win humbly, with an evident focus on the future.

When asked about the future of the team’s season, Coach Kevin Corsiglia said that the team is, “working on just being more consistent.”

With only two games remaining in the season, consistency is the main goal for the coach and his team.

The season is 17 games in and Skyline has a winning record of 10-7. Finding a constant strength and performance will help hold this record in the win column.

The last two games held that outlook of consistent results, both ending with a win. There are two more games, one on campus and one off of campus, before the end of the season.

Their final game of the season will be a home game, on Nov. 14 at 2:45p.m. and support is always welcome.