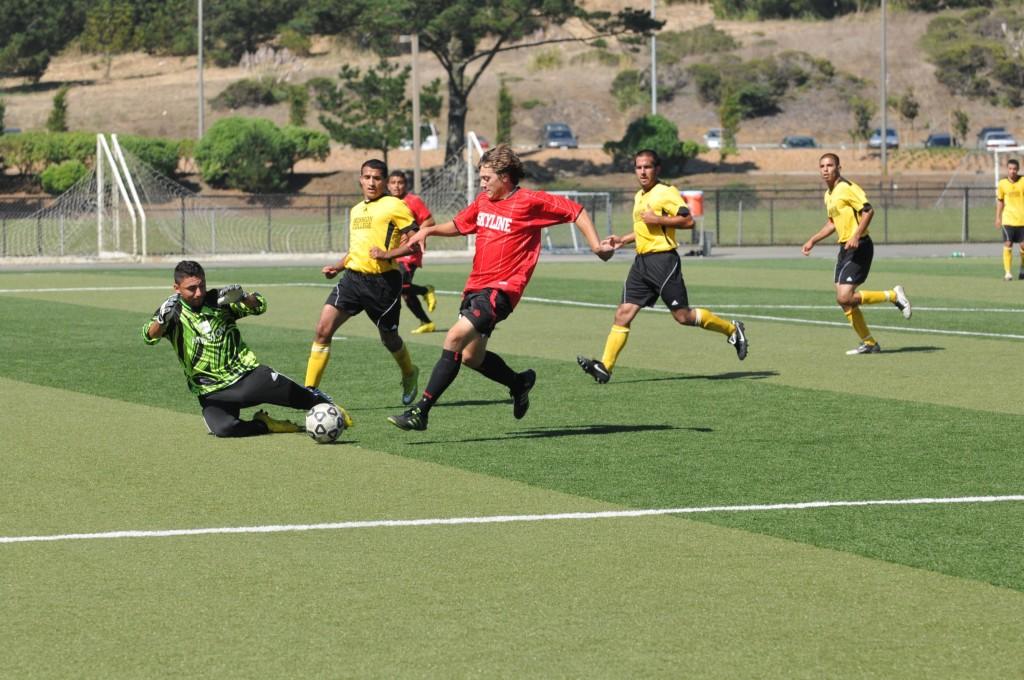 The Trojans scored three second half goals, including this one pushing the lead to 4-2. (David Evans)

After a dreadful 0-5 start, the Trojans get their first win of the season, pulling off an upset over Mission College.

Mission College came into this game filled with confidence, after a 6-3 shoot out win against Ohlone College, and defeating California’s leader in points (George Mayor II), and many expected a winless Skyline College to be an easy task, considering the Trojans scored only three goals in their first four games.

The Trojans also had to make game time adjustments, one of the most significant being the replacement at goalie, an essential piece to the defense. Second year player Gaston Diaz, was put in at goalie to replace his high school teammate Kevin Artiga, who did not suit up due to being late, thus violating team policy.

However, bigger than any player adjustment was the scheme change Head coach Daniel Link made for this game. Link decided to switch from their 4-2-3-1, to play in a 4-4-2.

“Before we were playing with one guy up top and five in the midfield, but we were not getting enough attack, so we played with a few more forward,” said Link.

The scheme change seemed to be a great decision, in the opening minuets of the game, first year mid-fielder Jonathan Yeeles connected on a long distance shot, to give the Trojans an early lead. The celebration didn’t last long, three minuets prior to the goal, Mission College answered back, tying the game at 1-1. After silencing an excited Trojan crowd, Mission College converted again just three minutes after tying the game, giving Mission the 2-1 lead.

Trailing by one goal at the end of the first half, the Trojans still saw a legitimate chance at the upset bid. At the start of the second half, the Trojans began to move the ball quickly, creating what would turn into an explosive offense throughout the remainder of this game.

After getting good positioning downfield, second year mid-fielder Pierre Rappolt scored from the right corner of the goal, making the game interesting once again. Shortly after, the momentum swing had the Trojan offense consistent, and got good positioning yet again after a penalty by penalty by Mission. Off the inbound pass, Pierre Rappolt deflected the ball to score again from the right corner.

With the Mission offense already struggling, Jonathan Yeeles finished it off with another goal from close range, giving the Trojans a 4-2 lead, and a fired up crowd. Skyline grinded out the remaining minutes of the game, and held on to win their first game of the season.

Shutting out Mission College in the second half, and scoring three second half to grab a big first win of the season, the Trojans showed Skyline College they are headed in the right direction, and ready to play with a lot of energy throughout the season.